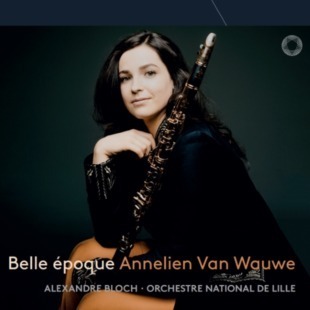 In a climate of peace, prosperity, freedom and scientific and cultural innovation the arts flourished in Europe during the Belle Époque (c. 1870-1914). For award-winning Belgian clarinettist Annelien Van Wauwe this Golden Age of beauty and creativity has inspired the repertoire for her debut album on Pentatone, recorded with Orchestre National de Lille conducted by Alexandre Bloch. The project is supported by Annelien’s 2018 Borletti-Buitoni Trust Award and is a co-production with BBC Radio 3, which enrolled her as a New Generation Artist 2015-2017.

“I grew up in a country full of architectural gems and objects from the Art Nouveau period that exuded elegance, style, flowing lines and curves,” comments Annelien. “The French music of Claude Debussy, Charles-Marie Widor and Gabriel Pierné is so evocative of this era and is the keystone for these other contemporary European composers from Germany (Manfred Trojahn), Italy (Luciano Berio) and Belgium (Jelle Tassyns) – all countries in which I have lived and studied – whose works and arrangements refer one by one to existing pieces from the belle époque or are inspired by that style and period.”

Serenity, beauty of tone, playfulness, geniality, lyricsm … these are some of the hallmarks of music from this era and Trojahn’s Rhapsodie (in its premiere recording) is a clear homage to French music with its three sections, Rêverie, Intermède avec valse à la musette and Caprice. Enchanted by Brahms’ four-movement Clarinet Sonata in F minor (1895), Berio clearly saw the possibility of turning it into a concerto with only the addition of some newly composed music at the beginning, while the orchestration of recital works of Pierné and Widor on this album are by the young Belgian flautist and composer Jelle Tassyns.

one of the most exciting and original clarinettists of her generation

Van Wauwe achieved something unexpected with it [Mozart Clarinet Concerto]. Her approach was prompt and the tone of the instrument incredibly smooth. The articulation was so low-key that the roundest richest sound rang out. The second movement had a vocal almost operatic quality to it. I adored it.