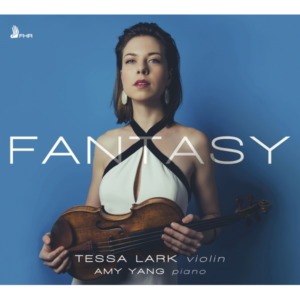 … a stunning solo CD debut … ravishing tone and perfect style – and a simply dazzling and passionate performance of Ravel’s Tzigane – Rhapsodie de concert. It’s a recital of the highest caliber.

This program reveals the versatility of the performers. I deeply loved the Kreisler, the energy and sparkle of the Telemann pieces, the gypsy spirit of the Ravel, and the sound and style of Yang’s Schubert. This recording contains some of the best playing I have ever heard.

Lark and Amy Yang (piano) enjoy the playfulness here [Schubert Fantasie], and both instruments have alot to show off about in the challenging variations. Lark then follows the Schubert with a real treat – her own composition, Appalachian Fantasy, highlighting another side to her musical heritage as a traditional fiddler. With her violin retuned to produce the traditional open string double-stopping drones, she draws on the melody from the Schubert, as well as bringing in traditional Appalachian tunes … in a fabulously infectious demonstration of her phenomenal talent here. Ravel’s Tzigane is a bravura showpiece for violin, although again, the piano part is not to be sniffed at, and Yang rises to its challenges well. Lark throws off the virtuosic gypsy flourishes with appropriate abandon, making this a lively and exuberant finish to the disc. All in all, this is a highly impressive calling card, amply demonstrating the range of Lark’s talents.

Tessa Lark includes three concise Fantasies by Telemann on her debut recital disc, each one a pithy sequence of linked sections. They’re highly engaging and melodically rich. Especially the A major one, its six short movements lasting barely five minutes. I found myself bingeing on all three, repeatedly and with no ill effects… As a bonus, the Kentucky-born Lark throws in her own Appalachian Fantasy. Wittily recycling the same Schubert song which crops up in his Fantasie, Lark throws a couple of Appalachian folk tunes into the mix. The technical brilliance is worn lightly, Lark sounding just like a folk fiddler letting her hair down.

So now here is Fantasy, and it’s every bit as strong as one would have expected. Conceptually, as the title suggests, it’s a celebration of the flights-of-imagination, free-form composition known as the fantasy. Repertoire-wise, it’s wide-ranging: four centuries, with Telemann at one end, and Lark’s own Appalachian Fantasy of 2016 at the other. In fact those two offerings encapsulate Lark’s qualities rather neatly: ‘modern’ Telemann readings whose lightness and dance quality feels as indebted to Lark’s Bluegrass folk-fiddling roots as to her lightly worn historical awareness, and with their contrapuntal writing beautifully voiced. Then her Appalachian Fantasy, a superbly coloured, multifaceted folk medley vividly evoking the vast plains of her home turf, complete with an opening which also cleverly honours the previous Schubert Fantasie (which itself is played with immense sensitivity by her and Yang) by translating his song into Kentucky tongue. Add a strong Tzigane – equally in tune with her own folk roots – and I’m already looking forward to whatever Lark does next.

On the evidence of this musically engaging programme, violinist Tessa Lark has a canny ability to adjust her approach according to the stylistic dictates of whatever she’s playing. Her own Kentucky grass roots sing out from her Appalachian Fantasy, a lively essay … played with a combination of spirit and technical brilliance. She’s ‘one hell of a fiddler’… Lark and Yang acquit themselves royally and the sound is… superb. Recommended.

Her violin playing is meticulous with a silky sound… the selection of works is very well chosen and allows the expression of all Tessa’s talents.

The CD concludes with one of the true warhorses in the repertoire, Ravel’s Tzigane – Rhapsodie de concert, a fantasy in all but name. From the start of the initial solo-violin section, Lark produces that essential full gypsy-like singing tone, yet ever mindful of the composer’s dynamic range, all delivered with impeccable intonation throughout… This performance alone must certainly be up there alongside some of the best available… For me, this CD ticks virtually every box – and more. It is not a random collection of pieces, but is clearly and logically structured. Even without Appalachian Fantasy there is already a good range of styles and mix of solo and duo works. Factor in Lark’s own composition, and it becomes a real winner, with playing of the highest order from both artists, and immensely entertaining along the way.