“Walker, playing with staggering virtuosity and charm, kept the audience on the edge of their seats throughout, and brought the house down at the end.”
Tim Ashley, The Guardian 26 February 2014

“Adam Walker’s playing was miraculous, his tone shifting imperceptibly from seductive roundness to an edgy astringency and adding layers of nuance to Watkins’s already thoroughly imagined, translucent writing. Walker literally breathed character into the music, with an effortless, assured virtuosity that played games to great effect with the orchestra, and with Daniel Harding superb in his control of balance and attack.”
Classical Source 25 February 2014

“Walker had as many notes to play as the rest of the orchestra put together, and his non-stop stream of birdsong was presented with a virtuosity which was discreet rather than showy (no flamboyant flutter-tonguing, or shakuhachi effects).”
Michael Church, The Independent 24 February 2014

“Adam Walker seemed up for every challenge thrown at him. The opening veered between agitation and calm, cascades of obsessive repetition giving way to something more lyrical. Then came a movement of soulful rhapsody, Walker’s flute calling out longingly, the rest of the orchestra responding in kind… Flute-players may end up being grateful for the way that this new concerto expands their repertoire.”
Nick Kimberley, Evening Standard, 24 Feb 2014 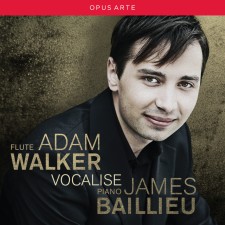 “He is a superb player, with a tone that is slightly cool, and there is much delicacy of nuance in his phrasing…the programme could not be more enticing. Poulenc’s Flute Sonata has one of those exquisite, unforgettable cantilena slow movements, and it is played here quite magically. The work then ends with a delicious Presto giocoso which rgings stunnign virtuosity from Adam Walker… James Baillieu provides accompaniments with just the right degree of often gentle support, balanced with the flute to perfection.”
Ivan March, Gramophone July 2013