Time on tour with Tetzlaff

To bring all the musicians together, the Borletti-Buitoni Trust specially commissioned a work by young British composer Richard Baker and acclaimed poet and librettist Lavinia Greenlaw, entitled Written on a Train.

Just as the BBT launch tour in 2004 gave the first award winners from 2003 the opportunity to work and tour with Mitsuko Uchida, so these 2004 and 2005 winners benefited from their experience with Christian Tetzlaff. The group worked together in the inspirational setting of Aldeburgh for three days of collaboration, developing partnerships and friendships, which was an important fulfilment of the Trust’s aims.

The Aldeburgh Residency preceded a concert at Snape Maltings Concert Hall. The next day’s programme at Queen Elizabeth Concert Hall in London included a pre-concert talk at 6pm, with Christian Tetzlaff in conversation with BBT Artistic Committee member Adam Gatehouse. The tour continued in Brussels, Amsterdam and Hamburg and concluded in Vienna.

Kleine Zaal at the Concertgebouw, Amsterdam

Six young musicians pool together their spectacular talents
…what a unique event Tuesday evening’s concert was. Under the banner ‘Strings with Variations’ the audience of the Concertgebouw’s Kleine Saal was treated to an entire chamber-music festival condensed into two marvellous hours.

Chamber Music of the finest
The presentation of this concert in the small hall was quite unpretentious, but the quality and sound of what was on offer was quite spectacular… These fabulous six musicians …presented on Wednesday chamber music of the finest played in brilliantly varied formations.

Masterful and spellbinding
Right at the beginning he [Tetzlaff] presented Honegger’s Sonatine as an exciting dialogue with the cellist Christian Poltéra. Christianne Stotijn’s interpretation of songs from Mahler’s Des Knaben Wunderhorn got right under the skin; percussionist Colin Currie showed virtuosity and wit with Trilogy by Dave Maric. Pure love of music and joy of collaboration were played out in perfect harmony by Tetzlaff, Poltéra, violinist Soovin Kim and pianist Shai Wosner in Dvorak’s piano quartet…

Young, grand and uncomplicated
Might and money are still always concentrated but no longer require education. The finer forms of patronage are, therefore, all the more heart warming. And the Borletti-Buitoni Trust is a good example…Headed by violinist Tetzlaff, the 2005 winners are currently on tour and appeared at the Brussels Conservatory on Monday evening. Firstly it was a great pleasure to see Shai Wosner again,… Without a single virtuoso trick, his accompaniment of several songs from Mahler’s Des Knaben Wunderhorn showed that he is cut from a rare cloth. And the same holds true of Christianne Stotijn who, together with Wosner, achieved complete psychological equilibrium in Das irdische Leben and Urlicht.
The programme also included two Belgian premieres: Trilogy for live percussion and CD by Dave Maric, and Written on a Train by Richard Baker. The former was performed with striking precision by Colin Currie, even though the work could just as well have been done entirely on CD. But then just looking at and listening to a loudspeaker would have been rather boring! Richard Baker’s piece vied with Trilogy in its lack of motivation and rhetorical cogency, but worked well nonetheless: as a totally innocent and innocuous piece d’occasion, specially written for this unusual combination of forces.
Dvorák’s piano quartet, with Tetzlaff playing viola and Soovin Kim the violin, was also a coming-together at once grand and unassuming. These young musicians are already at the top of their profession and it is wonderful that they are still prepared to take part in an uncomplicated party of this nature. 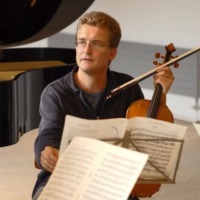 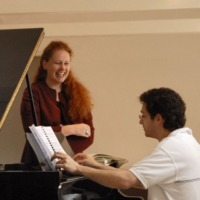 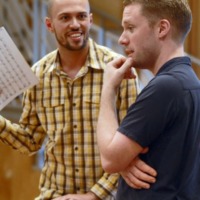 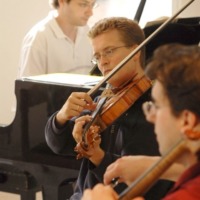 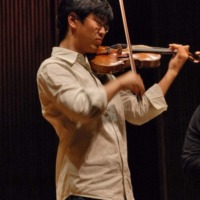 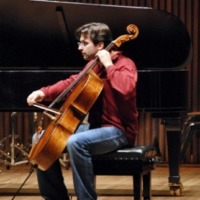 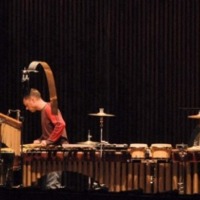 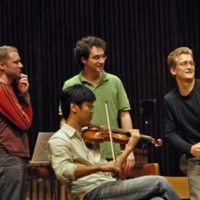 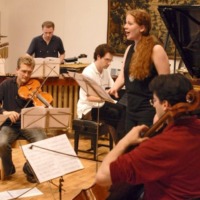