Borletti-Buitoni Trust
Back to Blog
16 July 2010

I’m not a writer. My teacher at primary school had always laughed at me when he was reading my essays … regardless of this fact I dare to write a few words about our last recording of Dvořák‘s music in Rudolfinum in Prague and share our feelings from this great experience. 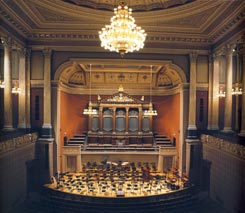 Perhaps it would be reasonable to write some facts from history and our reasons for this project at first. Don’t worry, I don’t want to bore you with facts about Antonín Dvořák from history books but just to let you know about a few interesting things from his personal life with his family in Prague.

Dvořák came to Prague as a student at the age of sixteen in 1857 and it profoundly changed his life. He was coming from a provincial atmosphere to the centre of the musical and social events where he had great occasion to evolve his musical talent. Naturally he wasn’t only studying the music all the time but he was also attending favorite coffee bars with his friends and later as a reputable composer he was going to the coffee bar opposite his house to read the newspapers and smoke cigars almost every day, which his wife didn’t like. Unfortunately many of these coffee bars don’t exist any more so we cannot share the atmosphere of these places. As I have mentioned before Dvořák was coming from the countryside. All his life he worshiped nature and needed it for his living and composition. One can easily recognize its influence throughout his entire work. He was often going to a park close to his house and was listening to the birds singing. Nowadays it is impossible to hear the birds singing there because of the noisy trams and cars … Besides the nature Dvořák adored trains. He was going to the main train station very often to talk with the staff about the news in running the trains.

Now I will advance a bit and focus on Dvořák’s incidence in Rudolfinum and a connection with our recording. When Dvořák came to Prague Rudolfinum didn’t exist yet. When it was opened in 1885 he conducted the first concert of Czech Philharmonic there in 1896. At the beginning Dvořák didn’t like the main hall in Rudolfinum (Dvořák’s hall now), he refused to conduct there because of the acoustics, which is paradoxical. After the acoustic adjustments had been made many of Dvořák’s pieces such as his violin concerto, Slavonic dances etc. were premiered there.

Inside the building one can still feel the atmosphere from those days.  So when we made the decision to record our new CD for Supraphon, we decided to connect Dvořák’s music with this place again. After our recordings of Haas, Janáček and Prokofiev works we wanted to record Dvořák’s gorgeous music and to convey to our listeners through our recording, that the history of Prague and Rudolfínum is still alive and that we are glad to contribute to it.

The two quartets on this recording (op.96 and op.106), are different in the structure of composition but simultaneously they are connected by a sensation of happiness and immense submission and godliness. Dvořák wrote op. 96 in America when he was retired in summer time and the last of his quartets, op.106, originated when he finally came back home to his family and friends. I am sure that everyone can share the same feelings from these quartets if listening to them properly … many times, when I was a student, I was walking around Rudolfinum and Antonín Dvořák’s sculpture and was wishing to have a chance to play there once and to feel the same history from this place like many other famous artists. When we were recording the CD I was thinking about it and in truth I felt it very strongly. I think that my colleagues felt the same.

Normally it is not easy to record in a place like Dvořák’s Hall in Rudolfinum. If you get the chance to do so than you have to pay for it and it is expensive … we are very glad that at the time when we decided to do this project BBT supported us financially. We have to admit that without their help recording would be much more complicated for us. It is very pleasant to realize that there still exist companies and individuals that share the excitement for music and its history with us. We hope that our listeners will appreciate the effort which all of us put into this project.

Pavel Haas Quartet’s recording of Dvorak Quartets op.96 and op.106 will be released by Supraphon in autumn 2010.  www.supraphon.com Preview tracks will be published on www.bbtrust.com during October.  The quartet’s full discography is available on Supraphon here