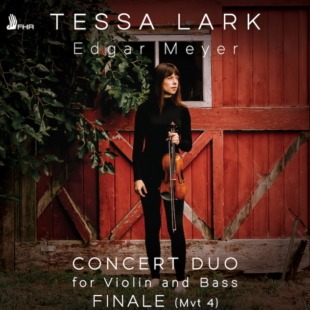 In advance of Tessa’s forthcoming album, The Stradgrass Sessions, First Hand Records is releasing a single (FHR100S2) on 4 December 2020 featuring Tessa Lark and Edgar Meyer performing Meyer’s Concert Duo for Violin and Bass, Finale (Mvt 4) which is available on all digital channels, as well as a short film.

“This album is a snapshot of the way I live in music; diversely, organically, intimately, sometimes collaboratively, sometimes solitarily, always sincerely – and anywhere, be it a concert hall or home studio.” Tessa Lark

Born and raised in Kentucky, violinist Tessa Lark traces her earliest musical influences to bluegrass, Appalachian and other American folk styles, which have subsequently inspired her classical training, career and recital programming. The Stradgrass Sessions, scheduled for worldwide release in Spring 2021 on First Hand Records (FHR), is an authentically personal project that explores the violin’s stylistic capabilities through a classical lens with a ‘picking circle’ of some of America’s most distinguished multi-genre composer/musicians around today – jazz pianist Jon Batiste, bassist Edgar Meyer, fiddler Michael Cleveland and mandolinist Sierra Hull. The Stradgrass Sessions also features the premiere recording of a work by American composer John Corigliano.

The inspired term ‘Stradgrass’ came about in 2015 when Tessa first experienced the novelty of performing bluegrass on the 1683 ex-Gingold Stradivarius violin, on loan to her at the time.  Stradgrass soon became something of a personal trademark, representing the synthesis of Tessa’s musical styles (even though she had to return the Strad in 2018 and actually recorded this album on her ca. 1600 Maggini violin, on loan through the Stradivari Society of Chicago). Calibrating her classical training with the more improvisatory approach of her colleagues was a pleasurable challenge for Tessa: “An album like this is very natural to me. It’s where I live in music. I feel I grew a lot as an artist, as it did require me to listen with even bigger ears and a bigger soul.”

The choice of My Old Kentucky Home as a theme to improvise upon with legendary jazz pianist Jon Batiste has deep meaning for Tessa, not only because Kentucky is where she grew up but also because of the sentiments inherent in this old minstrel song. The majority of this track, the first laid down, comes from their first moments playing together.

Lazy Katie is the result of a jam session with superstar fiddler Michael Cleveland. His more traditionalist approach evidently resonates with Tessa, and because he is blind and deaf in one ear, his sound is very articulate and clear; “He plays something once and even if it’s just on an iPhone it sounds like it’s ready for a Grammy award” (he has two of those Grammy awards and 12 Player of the Year awards from the International Bluegrass Music Association).

Tessa cites Edgar Meyer as one of her biggest musical influences. Since first performing with him in 2019 she now includes him in her circle of chamber music collaborators and recognises purity and poignancy in all of his work. Although she had not met Sierra Hull before making the album, Tessa was keen to have her onboard as she admires the confidence and consistency in her ‘phenomenal’ playing that reflects the aims of classical players. For this reason, she suggested they perform together some of the Bartók 44 Duos, as well as Hull’s own Chasin’ Skies. They were forced to record these remotely due to the pandemic lockdown but the intensity of listening to and attuning her own playing to Hull’s ‘untainted’ interpretations on mandolin led her deep into the music via some different paths.

Tessa reels her classical solos into the album’s repertoire with integrity and intelligence.  Ysaÿe’s Sonata for Solo Violin No.5 is a favourite work in which she hears folk influences, such as the second movement (Danse rustique) with all the high spirits of a barn dance. And John Corigliano’s STOMP, heard here in its premiere recording, employs jazz/bluegrass themes and techniques which demand unusual skills of co-ordination, musicality and style from the performer.

The dream of recording The Stradgrass Sessions was realised with the support of Tessa’s 2018 Borletti-Buitoni Trust Fellowship and the interest of First Hand Records (which also released her critically acclaimed first solo album, Fantasy, in 2019). The collaborative nature of the project necessitated separate recording sessions to suit everybody’s busy schedules, and was further complicated when the pandemic and subsequent lockdowns struck. But, where there’s a will, there’s a way: the commitment of the players, along with the dedication and expertise of co-producers Silas Brown and Michael Thurber, made the completion of the recording possible – remotely, and in a host of different venues – throughout the summer of 2020.

“So now here is Fantasy, and it’s every bit as strong as one would have expected…with Telemann at one end, and Lark’s own Appalachian Fantasy of 2016 at the other. Appalachian Fantasy [is] a superbly coloured, multifaceted folk medley vividly evoking the vast plains of her home turf, complete with an opening which also cleverly honours the previous Schubert Fantasie (which itself is played with immense sensitivity by her and Yang) by translating his song into Kentucky tongue. Add a strong Tzigane – equally in tune with her own folk roots – and I’m already looking forward to whatever Lark does next.” Charlotte Gardner, The Strad, December 2019