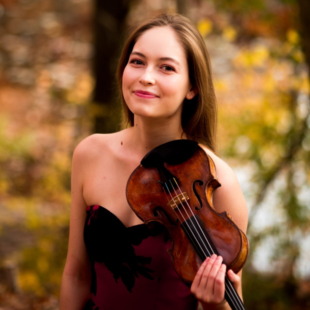 The interval since BBT’s last announcement of its biennial awards and fellowships in early 2020 has been one of pandemic, lockdown, disruption and difficulty for many musicians, especially the younger ones just beginning to establish their careers. In recognition of these exceptional circumstances, BBT has generously increased its funding for 2022 and granted four Awards (£30,000 each) and five Fellowships (£20,000 each):

BBT awards are always about more than money. The Trust has a wealth of experience and contacts to offer and, as well as assisting with practical needs, also encourages these young musicians to create imaginative projects that will help develop their future careers. These awards are announced on 17 March to mark the birthday of the late Franco Buitoni who co-founded BBT with his wife Ilaria Borletti Buitoni.

GENEVA LEWIS violin
New Zealand-born Geneva Lewis (23) grew up in California and made her solo debut at age 11 with the Pasadena Symphony Orchestra. She studied at the New England Conservatory where she is now an Artist Diploma candidate studying with Miriam Fried. Widely praised for the purity and honesty of her playing, she has performed with orchestras across the world including recent and forthcoming appearances with Orpheus Chamber Orchestra, Auckland Philharmonia and Sarasota Orchestra. In recital, recent and upcoming highlights include performances at Wigmore Hall, Tippet Rise and Kravis Center among others. Her love of musical collaboration and playing chamber music involve her spending summers at the Marlboro Music Festival and Ravinia Steans Music Institute. She performs on the ‘Joachim-Ma’ Stradivarius c. 1714, generously loaned by the New England Conservatory. As well as her BBT Award, she received a 2021 Avery Fisher Career Grant and was Grand Prize winner of the 2020 Concert Artists Guild Competition.

JAMES NEWBY baritone
British baritone James Newby (29) studies with Robert Dean and is currently living in Germany as an Ensemble member of Staatsoper Hannover. A former BBC New Generation Artist (2018-21), he is now an ECHO Rising Star with appearances at major concert halls throughout Europe in the 2022/23 season. As a recitalist he regularly appears at Wigmore Hall, Leeds and Oxford Lieder Festivals and on the BBC. Operatic engagements include La Monnaie Brussels, Nevill Holt Opera and Glyndebourne, and recent and upcoming recital highlights include performances with Arcangelo and Britten Sinfonia. On the concert platform he has sung with the BBC Symphony, Gabrieli Consort, La Nuova Musica, RTE National Symphony Orchestra, Orchestra of the Age of Enlightenment and Cincinnati Symphony Orchestra. His debut solo album I Wonder as I Wander (BIS) with pianist Joseph Middleton met with worldwide acclaim. His BBT Award joins his 2016 Kathleen Ferrier Award, Trinity Gold Medal (2017), Glyndebourne’s John Christie Award (2017)and he was a Rising Star for Orchestra of the Age of Enlightenment’s 2017-2019 scheme.

EMA NIKOLOVSKA mezzo-soprano
Macedonian-Canadian Ema Nikolovska (28) grew up in Toronto where she studied at the Glenn Gould School, followed by postgraduate training at London’s Guildhall School. Recital performances in the last year included at Pierre Boulez Saal, Wigmore Hall, Elbphilharmonie Hamburg and Verbier Festival as well as her BBC Proms debut. Her collaborators include Malcolm Martineau, Wolfram Rieger, Graham Johnson, Jonathan Ware, Joseph Middleton, Steven Philcox, and Barry Shiffman. Opera highlights this season include the title role in Christian Jost’s Die Arabische Nacht, along with roles in Mozart’s Die Zauberflöte, Rameau’s Hippolyte et Aricie, Janáček’s Jenůfa and Verdi’s Rigoletto. She is currently a BBC New Generation Artist (2019-22) and a member of the International Opera Studio at the Berlin Staatsoper Under den Linden. In addition to her BBT Award she won First Prize at the International Vocal Competition in ‘s-Hertogenbosch, the Ferrier Loveday Song Prize (Kathleen Ferrier Awards) and was a prize-winner at the Young Classical Artists Trust International Auditions.

Formed in 2012 at London’s Royal College of Music, the Consone Quartet is noted for honest and expressive interpretations of classical and romantic repertoire. The Quartet’s debut CD of Haydn and Mendelssohn was met with great critical acclaim. Consone has performed at Wigmore Hall, Snape Maltings, Cheltenham, Queen’s Hall Edinburgh, Stoller Hall Manchester and English Haydn Festivals, toured the north of England and Scotland, and hosted a ‘Consone & Friends’ series on Radio 3 from Dora Stoutzker Hall. In 2021 the quartet founded ‘Barnstorming’ – chamber music series in barns, supported by Continuo Foundation. Future highlights include De Bijloke, Belgium; Heidelberg Festival in Germany; and tours of North America and Japan. In addition to its BBT Fellowship, Consone is the first period instrument quartet selected as BBC Radio 3 New Generation Artists (2019-2022), and prizewinners of both the Royal Over-Seas League Competition and York Early Music Competition.

ALESSANDRO FISHER tenor
A Choral Scholar at Clare College Cambridge, reading Modern and Medieval Languages, British tenor
Alessandro Fisher (33) then studied at London’s Guildhall School of Music and Drama. He made his Salzburg Festival debut as Lucano, L’Incoronazione di Poppea and has appeared at Garsington, Glyndebourne, The Grange Festival and London’s Royal Opera. In concert he has appeared with the BBC Orchestras and the Netherlands Radio Philharmonic, as well as in recital at Cheltenham, North Norfolk and Oxford Lieder Festivals and Wigmore Hall. Future engagements include Osvaldo in Mercadante’s Il Proscritto for Opera Rara, Mendelssohn Elias at the Badisches Staatstheater Klagenfurt, Monteverdi Vesperae della beate Vergine with La Nuova Musica, Vaughan Williams On Wenlock Edge with the BBC Philharmonic and The Seven Deadly Sins with the London Symphony Orchestra. In addition to his BBT Fellowship, Fisher is an Associate Artist of The Mozartists and a former BBC New Generation Artist (2018-2021). He won First Prize at the 2016 Kathleen Ferrier Awards.

ZLATOMIR FUNG cello
Of Bulgarian-Chinese heritage, Zlatomir Fung (22) began playing cello at three and earned fellowships at Ravinia’s Steans Music Institute, Heifetz International Music Institute, MusicAlp and Aspen Music
Festival/School. Fung has featured on NPR’s Performance Today and was selected as a 2016 U.S. Presidential Scholar for the Arts. He studied at The Juilliard School under the tutelage of Richard Aaron and Timothy Eddy. Fung has performed with a number of American orchestras and counts as his chamber music partners the likes of Joshua Bell, Shai Wosner and the Calidore Quartet. In addition to his BBT Fellowship, Fung was the first American in four decades and youngest musician ever to win First Prize at the International Tchaikovsky Competition Cello Division and was a 2020 recipient of an Avery Fisher Career Grant.

LUCIE HORSCH recorder
Taking up the recorder at just five and studying at Amsterdam Conservatory’s Sweelink Academie from 11, Dutch player Lucie Horsch (22) studied recorder with Walter van Hauwe, as well as piano with Jan Wijn. A charismatic advocate of her instrument, Lucie’s musicality extends over multiple genres as well as developing new repertoire. Lucie plays as a soloist with the Royal Concertgebouw, the Zürich Tonhalle, Uppsala Chamber and Manitoba Chamber orchestras. In recital she performs with French lutenist Thomas Dunford. Lucie is an exclusive Decca Classics artist. Her debut CD featuring Vivaldi won the 2017 Edison Award. Her second album Baroque Journey, recorded with the Academy of Ancient Music and Thomas Dunford, reached No 1 in the UK Classical Charts and won a 2019 OPUS KLASSIK prize in Germany. In addition to her BBT Fellowship, in 2020 Lucie was the recipient of the Dutch Music Award, the highest acclaim for a musician in the Netherlands, and in the 2021/22 season is an ECHO Rising Star, nominated by both the Amsterdam Concertgebouw and Cologne Philharmonie.

THEODORE PLATT baritone
British-Russian baritone Theodore Platt (27) read Music at St John’s College, Cambridge, graduating in 2016. He is an alumnus of the Verbier Festival Academy and the Royal College of Music Opera Studio. As a member of Bayerische Staatsoper’s Opernstudio (2020-2022) his roles included Wiedehopf/Die Vögel and Fiorello/Il Barbiere di Siviglia. He attended the Internationale Meistersinger Akademie, which led to performances with the Nuremberg Symphony Orchestra and a recital of Schubert Lieder broadcast on BR-Klassik. An avid recitalist, Theodore made his Wigmore Hall debut with Graham Johnson in 2019 and looks forward to returning with Malcolm Martineau this season. Other recent highlights include his debut at the Oxford Lieder Festival with regular duo partner Keval Shah. In addition to his BBT Fellowship, Theodore has had success in numerous competitions, winning prizes in the 64th Kathleen Ferrier Award, Veronica Dunne International Singing Competition, Copenhagen Lied Duo Competition, Lies Askonas Competition, and the Prix Thierry Mermod (Verbier Festival).