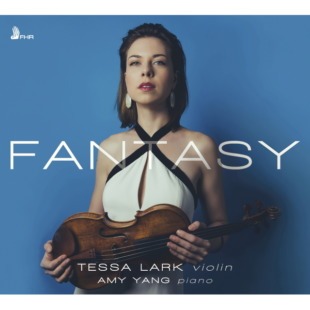 American violinist Tessa Lark has chosen a selection of some of her most cherished Fantasies and Rhapsodies for violin for the recording of her debut solo album, released on First Hand Records in September 2019.

* For the Schubert, Kreisler and Ravel she is joined by acclaimed pianist Amy Yang.

Born and raised in Kentucky, her first musical influences came from Bluegrass, Appalachian and other American Folk styles and have subsequently inspired her classical training, career and recital programming. The ‘fantasy’ genre in classical music, with its free-form composition unbound by traditional structures, immediately appealed to her fiddler’s soul and improvisational leanings.

Conjuring up a world of make-believe and freedom, the musical form of ‘fantasy’ has existed for centuries. The earliest on this album are by Telemann (1681-1767) and the most recent is Tessa’s own Appalachian Fantasy in which echoes of popular home state melodies such as Cumberland Gap and Bonaparte’s Retreat mingle with a homage to Schubert’s Fantasie in C Major featured on this disc. These works are often mercurial, spirited, pacey and highly virtuosic. The three of Telemann’s are all differently conceived and testify to the composer’s wide-ranging influences; Schubert’s effectively represents his longest single movement, played without break although there are seven sections; Ravel’s dancing Tzigane was composed after studying Liszt’s Hungarian Rhapsodies and Paganini’s 24 Caprices; and Kreisler’s Viennese Rhapsodic Fantasietta sets up a nostalgic honey-toned waltz rhythm that escalates to a bravura finale.

The recording was made possible by a Fellowship from the Leonore Annenberg Arts Fellowship Fund and released by First Hand Records with the assistance of the Borletti-Buitoni Trust. For this recording Tessa played a 1683 ex-Gingold Stradivarius courtesy of the International Violin Competition of Indianapolis.

A rapidly rising international star in the classical realm, Tessa Lark is also a highly acclaimed fiddler in the tradition of her native Kentucky and, with BBT support, is also developing a project, Stradgrass, with multi-genre musicians such as legendary instrumentalist/composer Jon Batiste and the remarkable blind fiddler Michael Cleveland. 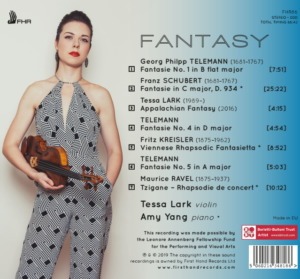