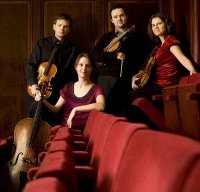 “Having revealed themselves as superb exponents of Mendelssohn’s music, the Elias players now seem natural Brittenists, but the styles are not without their commonfeatures: clarity, economy, lyrical decisiveness, faultless technique.”
The Sunday Times

Now it’s time for Beethoven. Not only is this highly acclaimed quartet embarking on a three year journey to perform the complete cycle of Beethoven string quartets, but it is also inviting the public to share the experience with them via a dedicated interactive website, supported by the Borletti-Buitoni Trust.

The website, which is launched 30 March 2011, has been conceived by the Elias String Quartet to encourage a wider audience appreciation of these masterpieces, some of the most profound works in the string quartet repertoire. Rather than just hear the finished result on the concert platform, the Elias
players are willing to share their immersion in study, analysis and discovery of Beethoven in a bid to demystify both the music and how they are preparing for this huge undertaking.

As well as regular blogs, recordings, video diaries of coaching sessions, rehearsals and concerts and an interactive forum (Your Beethoven), there will be contributions from seasoned professionals of the string quartet world. The Lindsay Quartet’s Peter Cropper, who has played each quartet more than 200 times over the last 30 years, launches the guest contributor page with a highly personal introduction to this remarkable body of work. Martin Saving, the Elias viola player, has launched the blog page with How Fast Shall We Play?, a considered view on the controversial subject of tempi and the metronome.

From 2012 the Elias String Quartet will begin performances of the complete Beethoven Quartets cycle at venues across the UK including Brighton, Southampton and Tonbridge, culminating in London for the 2014/15 season. In the meantime, forthcoming Elias String Quartet concerts featuring some of the early and middle period Beethoven works within recital programmes include London’s Wigmore Hall on 19 April, venues in Barnsley, Doncaster, Liverpool, Portsmouth and Whitehaven throughout May and June and the East Neuk Festival 2 and 3 July. Beethoven’s later quartets also feature in the 2011/12 season including Wigmore Hall and a Scottish tour.

An introductory film is featured on the website, made by the Borletti-Buitoni
Trust team of camera/editor Graham Johnston and producer David Hoskins,
along with individual video diaries from each of the players about their first
encounters with Beethoven’s works.

Sara Bitlloch, violin: “Along with Haydn, this is the body of work that encompasses the biggest development in composition.”

Donald Grant, violin: “We’d love our audience to get to know us through this process of learning these quartets.”

Martin Saving, viola: “You need to approach it with quite a bit of analysis and study of harmony and structure and form, to get a better understanding.”

>Marie Bitlloch, cello: “The Beethoven quartets are like the bible to the string quartet repertoire …throughout all of them there is every emotion you can go through. ”

Have your say: Go to www.thebeethovenproject.com