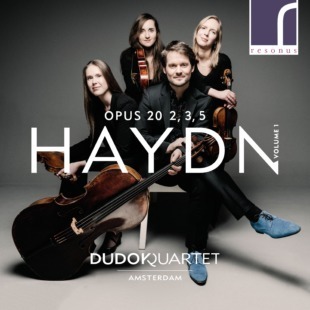 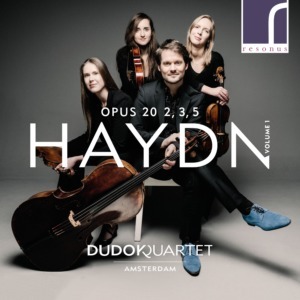 “The more you play Haydn, the more you discover that this man created a whole universe of music,

where everything exists.” Dudok Quartet Amsterdam

A mutual love of Haydn was the key reason the Dudok players first embarked upon their career as a quartet. Now, after almost a decade of playing his works together, they instinctively decided the time was right to focus on Haydn for these albums. This choice marks a significant change of direction.

Previous recordings with Resonus Classics established something of a pattern: Metamorphosis, Labyrinth and Solitude were all ‘concept’ albums featuring a classical work, a contemporary work and their own arrangement of work outside the string quartet oeuvre. This imaginative approach and curiosity about programming has set the Dudok Quartet apart from its peers.

The Quartet also considers its new bows – specially commissioned for these recordings – contribute another voice to its interpretations of these highly emotional, virtuosic and experimental works. Tailored to their individual personalities and instruments, the bespoke bows were crafted by Netherlands-based Luis Emilio Rodriguez Carrington and were part-funded by the Borletti-Buitoni Trust which is also supporting the Haydn recordings.

These dramatic quartets 2, 3 and 5 were recorded at Muziekcentrum van de Omroep in Hilversum (Netherlands) and the album’s release date just precedes the Dudok Quartet’s Wigmore Hall debut on 6 October. The remaining quartets 1, 4 and 6 have already been recorded at the same venue for release in 2020.

To coincide with the CD release, the Borletti-Buitoni Trust has made a short film made during the recording, featuring interviews with the Quartet and with the bow-maker: