The Franco Buitoni Award was conceived by BBT founder Ilaria Borletti Buitoni as a tribute to her late husband Franco (1934-2016), co-founder of the Borletti-Buitoni Trust. The Award of £25,000 is given every other year and recognises Italian musicians who promote and encourage chamber music at home and throughout the world.

Ilaria, and some of Franco’s friends including Mitsuko Uchida, Jonathan Biss and Andrew Starling, reflect on his lifetime of loving chamber music and the bonds he formed with so many musicians, both in his role as Chair of Amici della Musica di Perugia for over three decades and and through forming the Trust. His legacy continues with this special award in his name. 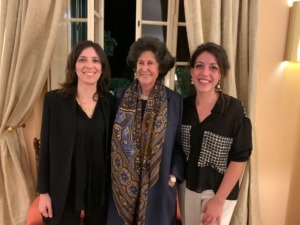 Following the announcement of Italian composer Silvia Colasanti as the 2021 winner of the Franco Buitoni Award, celebrations finally took place on 9 October, having been postponed from March because of the global pandemic. Amici della Musica di Perugia presented a special concert featuring the world premiere of Love Song, composed by Colasanti in appreciation of the award. Written for piano, percussion and string orchestra, it was performed by pianist Beatrice Rana (BBT Fellowship 2016) with the Orchestra da Camera di Perugia conducted by Enrico Bronzi at Teatro Morlacchi in the historic Umbrian capital city of Perugia.

In front of a capacity audience Ilaria Borletti Buitoni presented Silvia Colasanti with the award certificate and a handmade glass vase specially commissioned from Micheluzzi Glass in Venice, given by Giovanni and Benedetta Buitoni in memory of their uncle. 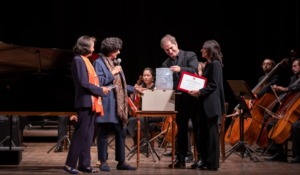 With this award I am delighted to welcome another highly talented musician, Silvia, into our BBT family. I was overwhelmed by the concert and the occasion; a wonderful new work superbly performed by an outstanding young pianist, Beatrice, who is also one of our BBT artists. What better tribute to my husband – here in his home town with the Amici della Musica, founded by his mother and directed by Franco for so many years.

I did not know Franco personally, only through Ilaria and other people dear to him. Love Song is full of powerful and emotive music to express the strong bond between Ilaria and Franco, described to me by so many people. I am deeply honoured to receive this Award.

The next Franco Buitoni Award will be given in 2023

Rome-born Silvia Colasanti is the recipient of two of Italy’s highest honours – Cavaliere della Repubblica in 2013 and Ufficiale della Repubblica in 2017. Her work has been interpreted by some of world’s finest musicians including Salvatore Accardo, Yuri Bashmet, Nathalie Dessay, David Geringas, Vladimir Jurowski and Quartetto di Cremona, among others. She is highly regarded for the lyrical and dramatic qualities of her music, whether for stage or concert platform. Her first opera, La Metamorfosi, was commissioned by Maggio Musicale Fiorentino in 2012 and since then the renowned Festival dei 2Mondi di Spoleto has commissioned four operas: Tre Risvegli in 2016, followed in subsequent years by a trilogy of works, Minotauro (2018), Proserpine (2019) and Arianna, Fedra, Didone (2020). Other major works include Le imperdonabili for Remembrance Day in 2017 and Oltre l’azzurro for Opera del Duomo to celebrate the 600th anniversary of Brunelleschi’s Dome in Florence. Her teachers and mentors include Luciano Pelosi at the Santa Cecilia Conservatory and Fabio Vacchi, Wolfgang Rihm, Pascal Dusapin and Azio Corghi. Her work is published by Ricordi (Universal Music Group).