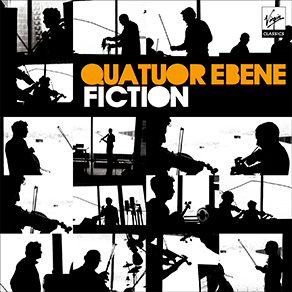 “That there is also musical integrity in this crossover work is fascinating. From the off one gets the feeling that this project makes musical sense. The colours that are evoked in their version of Miles Davis’s All Blues are worthy of any of their work with Ravel and Debussy. The textures in the Pulp Fiction arrangement are kaleidoscopic.”
Igor Toronyi-Lalic, The Times 22 October 2010

“Quatuor Ebène seem the string quartet most likely to take on the mantle of the Kronos Quartet, not least for their ability to accommodate jazz and pop influences.”
Andy Gill, The Independent 22 October 2010

“Akiko Yamamoto proves to be an ideal partner in the Piano Quintet, which achieves an extraordinary sense of drive and emotional abandon in the Finale.”
Calum MacDonald BBC Music Magazine  October 2009

“They have such an extraordinary range of tone colour combined with a suppleness of rhythm which gives their playing a kind of serendipity as though they had just chanced on one achingly beautiful sound after another. The result is unforgettable.”
BBC Radio 3 Building a Library: Faure Quartet. No 1 RECOMMENDATION, 28 March 2009

“Three French masterpieces (Debussy, Fauré, Ravel) played by young musicians with a rare degree of expressive subtlety, blended sonorities and electrifying joy. The late Fauré quartet achieves a fine balance between sounding suave and pulsing with life. Debussy quivers with febrile emotions, while the Ravel soars to heaven with refinement and poise.”
***** The Times, September 2008