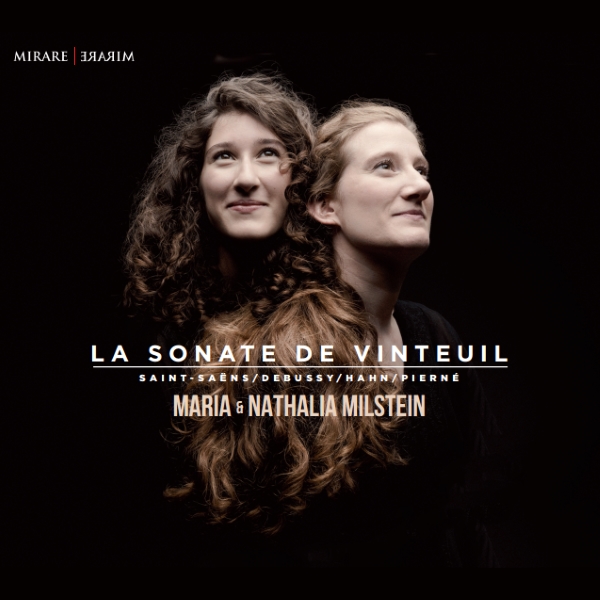 The Vinteuil Sonata on Mirare
with Nathalia Milstein piano

“Milstein is a big personality with her own very recognisable sound. This already makes her a rare breed in the violin universe. Her tone is full of nostalgia, depth and a certain fragility – reminiscent of the young Menuhin… There are no technical limitations. The sisters feel totally free to play as fast and as soft as they want. The result is breathtaking.”
*****
Biëlla Luttmer, de Volkskrant, 10 November 2017

“The programme of this CD alone deserves the highest acclaim. The theme is very intriguing, though it is rather the atmosphere of the “belle époque” that the Milsteins try to capture here rather than the solution to the Vinteuil riddle… violinist Maria, with her expressive tone and acute sense of line and direction, and her sister Nathalia, who supports flawlessly and with initiative from beginning to end. It is a pleasure to finally hear the Saint-Saëns Sonata given the serious attention that it deserves. It is absolutely not soggy madeleine-music, but powerful and pure nostalgia, as Swann and Proust experienced it a century ago.”
*****
Peter van der Lint, Trouw, 10 November 2017

“Maria and Nathalia Milstein confidently master all the technical challenges and are always searching for the lost melody in the spirit of these works, resulting in  playing of rich and reflective tones. In the slow movements especially, Maria Milstein lets her violin breathe wonderfully so that, as Proust writes in his novel, one almost ‘has the illusion of hearing a singer.'”
Bayerische Rundfunk, 9 November 2017

“They inhabit this work and are attentive to every note and every detail of the score…The Milstein sisters possess an infallible virtuosity without ever being flashy. The second movement [of Camille Saint-Saëns’ Sonata for Violin and Piano No 1] is luminous, charming, expressive and graceful, with cut-diamond precision… This recital shows immense musical maturity and is a delight from start to finish.”
****
Aurélie Moreau, Classica Magazine, November 2017

“The salon-like intimacy of the balance between the violin and the piano is totally appropriate, and the transparent detailing of the textures seems effortless, too. It’s hugely enjoyable, however much you know about Proust.”
****
Andrew Clements, The Guardian, 20 October 2017