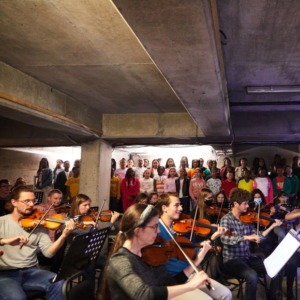 Kate Whitley’s Our Future in Your Hands. Photo Ambra Vernuccio

Kate Whitley’s Our Future in Your Hands
World premiere with Multi-Story Orchestra conducted by Christopher Stark
at Bold Tendencies, 14 September 2021

Blazing community epic
The honest consistency of the piece, building on the example of Greta Thunberg and the youth movement she inspired, is impressive. To help the children learn the music, Whitley builds on repeated phrases and scalic patterns, but she doesn’t change styles to suit the professional orchestra or the three excellent soloists. Much as they stand equally, at the beginning, for Sky, Water and Earth, the dominant effect is oceanic, rhythmic liveliness riding a sea of instrumental sound, occasional flaming flurries from the woodwind, inevitably earnest in its move from lament to optimism as represented by the two halves of the choir – one half “Young children of today”, the other “Children of the future”… This is a work with a future; it will finally receive its intended premiere at the Buxton Festival next year, should work in resonant ecclesiastical spaces around the country and – yes, when logistics are easier, on to the Proms, please.

An angry and effective piece inspired by Greta Thunberg’s activism is powerfully performed by local children
Our Future in Your Hands is inspired by Greta Thunberg’s activism, and it’s an angry piece – how could it not be? It begins with a low orchestral rumble that grows into the first of several insistent “protest songs” for the children, and ends with a chorus describing the world awakening – scarcely less fierce, though the words suggest optimism… Perhaps a feel-good, hopeful ending would have been trite – after all, Thunberg did say she didn’t want hope, she wanted panic. And there was certainly an adrenaline-based reaction to be had from experiencing the sheer volume of sound amid these echoing concrete walls, for listeners and for the children too. This, not extra maths and English, is what children have been missing out on over the last year and a half: the chance to be part of a big, creative, communal experience. It’s more than useful – it’s essential. 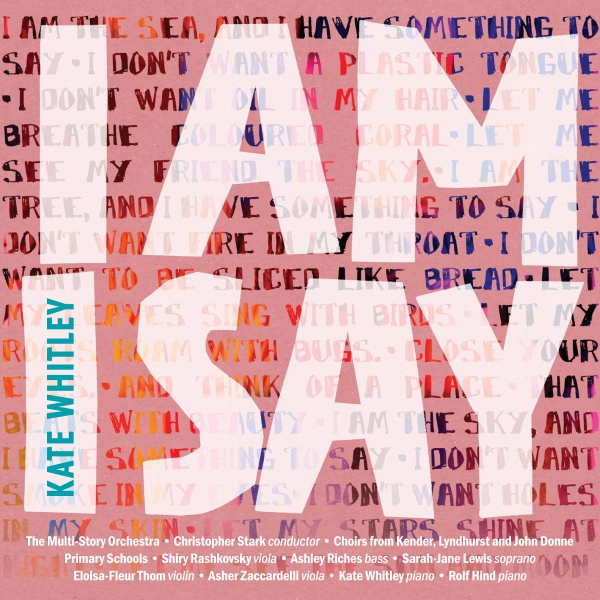 I Am I Say – NMC Composer Debut Disc CD

“This debut portrait album showcases Whitley, who is not yet 30, as a lush harmonist, an orchestrator who handles instruments boldly… and a melodist who isn’t afraid of big rhapsodic elegies. The performances are direct and excellent.”
Kate Molleson, The Guardian, 31 March 2017

“This selection, expertly conducted by the orchestra’s [Multi-Story] other co-founder, Christopher Stark, is an excellent introduction to her sonic world… It culminates in I Am I Say, a tremendous work for primary school children and orchestra… It is darkened and deepened by complex but deftly organised instrumental textures that rise to an ecstatic climax… Capricious, yet cogent, Whitley’s music has admirably user-friendly surfaces that conceal hidden intensities. We will hear much more of her.”
Richard Morrison, The Times, 18 April 2017

“Make no mistake, Kate Whitley is a composer to watch.”
Richard Whitehouse, Gramophone Magazine, May 2017

“Alongside [Multi-Story Orchestra] there’s been another success story: that of Whitley’s own music… Here, NMC’s invaluable Debut Discs series provides a snapshot of a fresh and individual creative voice, sometimes still finding itself, often speaking clear and true. Like Britten and Maxwell Davies, Whitley values writing for local communities and for children. She’s clearly got the knack; the title track is a stirring look at our place in the natural world.”
Rebecca Franks, BBC Music Magazine, May 2017