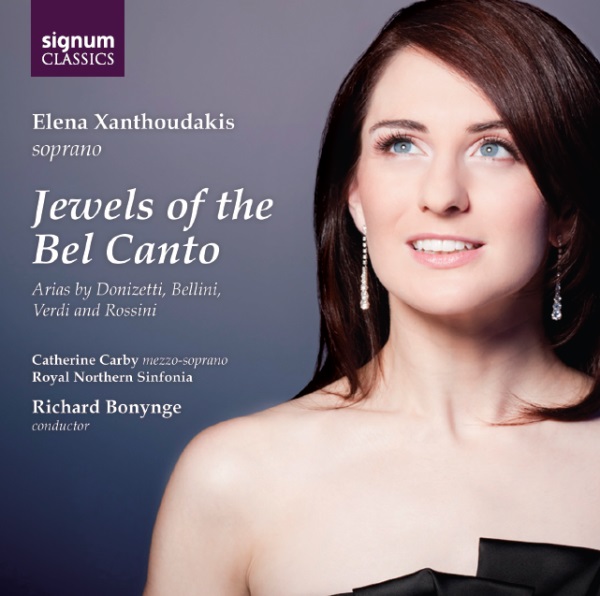 Jewels of the Bel Canto, CD on Signum Classics

“…[her voice] has a light timbre and gives the impression of effortlessness in the rapid runs and wild vocal leaps…This is an outstanding debut album from a young singer who will hopefully attract a new generation of bel canto fans.”
Steve Moffatt, Limelight July 2014

“Her tone is well formed, focused and supported, and she can cover a wide vocal range. The top of her voice does not become thin, which is just as well, for there is no shortage of high notes, which are steady in their production. Add to all that her flexibility and one has a singer who is worth hearing.”
John T. Hughes, International Recording Review

“She possesses that special requisite in bel canto singing of being able to power up to stratospheric notes with ease and pinpoint accuracy. With its trumpet effects, testing coloratura runs and top Cs, Donizetti’s regimental song ‘Chacun le sait’ from La Fille du Regiment proves but a walk in the park for Xanthoudakis.”
Graham Strahle, The Australian 19 May 2014

“From the first aria on this disc, Australian-Greek soprano Elena Xanthoudakis makes it obvious she is a singer to watch.  Her exquisitely focused voice has warmth and suppleness aplenty…Her intelligent approach and melting tones make each gem on this debut recording a winner.”
Patricia Kelly, The Courier Mail, May 2014