Borletti-Buitoni Trust
Back to Blog
23 February 2022

As a trio, we have always had a keen interest in contemporary music. Of the 20th and 21st century music we have worked on and performed, it is striking how many different ways a piano trio can actually be used, with each composer creating their own sound world with this conventional combination of instruments. A composer who intrigued us and whose universe we were curious to explore was Francisco Coll. As he had not yet written a piano trio, our idea to commission a new piece was born. With the support of the Borletti Buitoni Trust, Centro Nacional de Difusión Musical (Madrid) and Britten Pears Arts, we were able to make this project a reality. 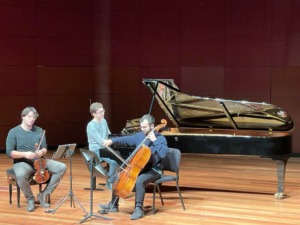 It was the second week of March 2020 that Francisco first sent us his new piano trio, along with an audio file for us to have a first impression. I distinctly remember this moment because it felt like receiving the most personal of gifts, an unknown world created especially for us. As fate would have it, we were also venturing into another unknown, with the World Health Organisation officially announcing the beginning of a global pandemic just one day before.

I think it is fair to say that none of us expected the levels of disruption that followed. Very quickly, as with musicians all over the world, our concert activity came to a complete standstill and our time previously spent on stage or rehearsing together was replaced by sterile Zoom meetings, FaceTime calls, yoga and learning to make sourdough bread. At least, I often told myself, I had my health.

The world premiere of Francisco Coll’s new piano trio was scheduled for January 2021, but the coronavirus crisis had meant we were no longer all living in the same city and navigating various social and travel restrictions made things more complicated than ever before. We reluctantly took the decision to postpone, which ended up being for the best because two out of three of us ended up contracting the virus that month. 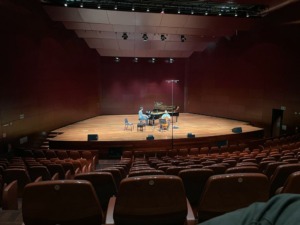 Many of you will remember the controversial advert of Fatima the ballet dancer, whose next job would be in cyber (“she just doesn’t know it yet”). It was a campaign which drew widespread criticism, but felt particularly relevant to us. Our brilliant cellist, Michael Petrov, had spent several months learning to code and eventually landed himself a full-time job in a software development company in spring 2021. For the first time since we formed our trio in 2010, we were facing a member change.

After playing some concerts together in autumn with the Armenian-American cellist Edvard Pogossian, we were delighted to welcome him as the new member of Trio Isimsiz and were finally in a position to make plans to prepare for the rescheduled premiere of Coll’s Piano Trio in January 2022.

The process of putting the piece together was far from normal – a reflection of the times. Because of the relatively limited number of days we would have together, we shared snippets of music with each other virtually to begin with. Once we were together, we did the same with Francisco, alongside asking him any questions we had. We always received a clear and prompt response, often accompanied with a thought provoking remark or a vivid image to help us to understand his intentions. 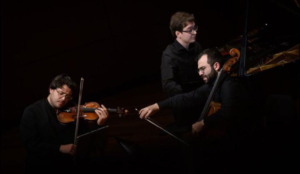 The piece itself is wonderfully inventive and very challenging, though thoroughly worth the demands placed on us. In the composers words, it’s “a voyage between the familiar and unconventional”. Within the four movements, there are recognizable elements of flamenco and tango, as well as a quotation from Strauss’ Die Schweigsame Frau.

Our work culminated in two performances in the Centro Nacional de Difusión Musical in Madrid and Sociedad Filarmónica de Badajoz. We are very much looking forward to meeting Francisco in the flesh and developing the piece together before the UK premiere at the Aldeburgh Festival in June and our CD recording in August. 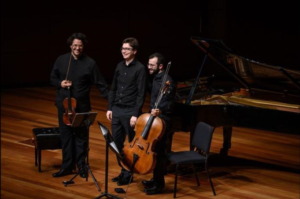