Borletti-Buitoni Trust
Back to Blog
23 February 2022

From There to Here
The Long and Winding Road

In May of 2020 –– yes! Month 2 of pandemic lockdown! –– I received a wonderful message of introduction from Trio Sōra.  Me, a Canadian composer of a certain age based in Ottawa, and them, a young and dynamic piano trio based in Paris!   They had just been awarded the very prestigious Borletti-Buitoni Trust Fellowship, and wanted to commission me to write a triple concerto.  It is one of those unexpected and unplanned moments in the life of a composer.  Given the circumstances surrounding the pandemic, it was wonderful to be busy, and to have such a large project to focus on.  This is my first commission from outside of Canada, which was both exciting and terrifying. 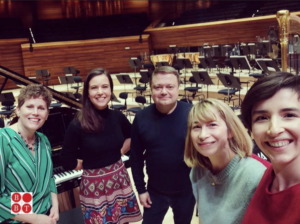 Creativity is a very messy pursuit!  Essentially, we understand the creative process as involving four stages: preparation, incubation, illumination, and verification. In reality, it is a whole lot crazier than that! It is fair to say that at the beginning of any creative process, there is chaos. Mary Shelley, author of Frankenstein, said, “Invention, it must be humbly admitted, does not consist in creating out of void, but out of chaos.” No matter what may be planned out prior to writing, you begin the process with more questions than answers. You simultaneously consider opposites because you aren’t certain which solution will be the best for any particular situation. Whenever I start a new piece, I consider many factors –– the forces involved; what can I communicate with these forces; what do I want to do as an artist?

When I started working on the piece in April 2021, I wanted to be able to find some common ground between myself and the trio.  It started very simply with the word “follow”.  We follow our dreams; we follow our hearts; we follow in the footsteps of those that came before.  Musicians are trained to follow –– they breathe together; they feel pulse together; they have an awareness of everything going on around them.  From this very focussed inquiry, I broadened my thoughts to include which elements in the natural world follow.  I was interested in how birds and animals move together, and the cues that influence that behaviour.  It was when I moved my thoughts towards plants that a concept started to emerge.  See?  I told you this was messy and tangential! 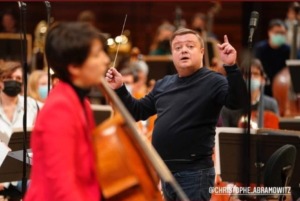 There is a biological phenomenon called Tropism.  Essentially it is the involuntary movement of a plant in response to an external stimulus.  For example, roots follow the water, leaves and blooms follow light.  That made me think about sunflowers and how they turn to follow the sun because they are heliotropes.  I found out that according to Greek mythology, the nymph Clytie was loved by and in love with the sun-god Helios.  Soon enough, Helios became bored and pursued the love of Leucothea instead. Even as Clytie was denied the love she sought, she continued to stare desperately at the sun for any change of heart. This angered Helios so much that he turned Clytie into a sun-gazing heliotrope, forever doomed to follow Helios across the sky.  He imprisoned her with movement and following.

Once I got to this point in my “incubation” phase, I assumed that poets and artists had also considered these themes.  Sure enough, in Sonnet VII, American poet Edna St. Vincent Millay (1892-1950) weaves a magical and touching thread about love, loss, and infatuation.

It is from this sonnet that the triple concerto takes its title, When I too long have looked upon your face. In Clytie’s case, movement was imposed as a punishment. In the course of our lives, we probably find ourselves following things for a variety of reasons — love, concern, empathy. When the following ceases, we may have conflicting feelings. The triple concerto explores these themes through three movements. The first movement (A Brightness Unobscured) is sparkling, light, and dazzling; the second (Irresolute, A Mind Undone) is doubting; the third (Accustomed to the Dark) is resolved and fierce. 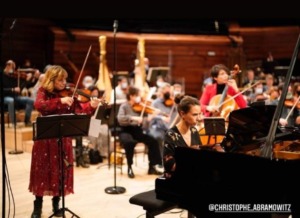 The week of the premiere was intense and exciting.  It was amazing to finally meet Trio Sōra who are bringing this piece to life!  From our first rehearsal together at the beautiful Fondation Singer-Polignac, I realized how talented these performers are, and how lucky I was to be working with them.  Very emotional, to be sure.

You can probably imagine how daunting a first rehearsal with orchestra is.  New music; unknown composer; a lot of people on the stage; a lot of conversation.  My work as a composer is essentially done before the rehearsal process begins — the notes are written!  What I can do at this point is balance and adjust.  Orchestre Philharmonique de Radio France under Mikko Franck, were enthusiastic, supportive, and extremely generous.  We could all feel that they wanted this piece to succeed, and that is a demonstration of true musicians.

Watching the concert hall fill up on Friday evening was amazing.  I watch the patrons find their seats; I hear fragments of music from the stage.  It is electrifying!  When the trio took the stage in their scarlet red tuxedos, the audience was exhilarated.  They supported and willed the musicians through every note and every movement.  I could not have imagined a better outcome.  It was absolutely thrilling!

After the concert, I went with the trio to the brasserie in Maison de la Radio.  The patrons clapped and congratulated us as we came in.  I took a seat where I could see the lights on Tour Eiffel, and reflected on the magical week that was. 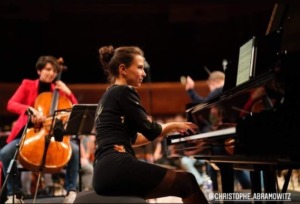