Borletti-Buitoni Trust
Back to Blog
15 November 2021

In an article written for The Arts Desk, reprinted here with permission, Judith van Driel, first violinist of the Dudok Quartet Amsterdam writes on approaching the elusive and unreachable in four chamber masterpieces as Rubicon Classics releases Brahms String Quartets and his Second String Sextet

In every life there are moments of great significance. Experiences that stick with us and define our own personal story.

Growing up as a young violinist, one of those defining moments for me was the first time I played a piece by Johannes Brahms. It was his Second Violin Sonata; I was sixteen years old. Of course I had heard Brahms’s music before, but by bringing his notes to life myself I discovered a whole new range of emotions I had never experienced with any other composer. Or even more than that: the music opened up a new, illuminated world to me. Playing Brahms made me feel a little closer to some inexplicable, but undeniable truth, that was being revealed through the notes.

On the other hand I immediately felt how hard it would be to come close to this “truth”. In all of Brahms’s music there is this element of something elusive and unreachable.

Deeply inspired by this experience, I decided to take up the challenge and to become a musician. 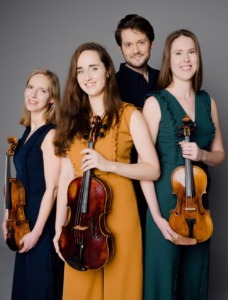 Since the foundation of the Dudok Quartet Amsterdam in 2009, Brahms has always been a key composer for us. That’s why we decided to record all of his string quartets, and his second string quintet, for our latest album. Since the Covid-crisis emptied our agendas, we used the opportunity for a profound research into Brahms’s musical world.

When Brahms was born in 1833, changes in the world of classical music were advancing as quickly as they were in the rest of society. Up until the end of the 18th century, composers wrote “circumstantial music”, often performed by themselves. But along with the development of the classical canon in the 19th century, composers were more and more considered as geniuses who wrote music for eternity. In his Neue Zeitschrift für Musik Robert Schumann started writing about music. When he discovered the young Brahms, he catapulted him into the spotlight, by writing that Brahms was “…singled out to make articulate in an ideal way the highest expression of our time, one man who would bring us mastery, not as the result of gradual development, but as Minerva, springing fully armed from the head of Cronus.” The confidence with which Brahms was appointed the “Beethoven of the romantic age” suddenly put the young composer in a gilded cage. Paradoxically, his dream of becoming a “great” composer was also a burden.

No wonder that writing a string quartet, the genre in which Beethoven excelled, was such a struggle for Brahms. He remarked to a friend that he had “destroyed at least twenty string quartets” before releasing the first two of Opus 51. Brahms spent at least eight years composing these quartets. The String Quartet in C minor developed into the most emblematic prototype of his musical language: an uninterrupted four-voice discussion, embedded in a dense framework of which the thematic material was elaborated to perfection. When we play this piece, we can often feel the composer’s struggle with the material.

String Quartet No. 2 leaves some of this struggle behind, affording more space for the gentler side of Brahms, and culminating in a last movement that is influenced by Hungarian popular music. The third string quartet was composed relatively quickly in the following year. Brahms was about to add a finishing touch to his First Symphony. While lingering on the finalization of that other proof of competence, he found inspiration for a different composition at his holiday home in Ziegelhausen. He scribbled down his Third String Quartet in just a few weeks. Brahms advised embedding it in a programme with music by Mozart and Haydn. This work became one of his personal darlings and shows his great affection for the early Viennese classics.

The Second String Quintet is one of his last works, and it’s fairly different from the quartets. Brahms had nothing more to prove, he felt more free to write what he wanted. The piece is full of joy and energy. The addition of an extra violist leaves us as players more space to focus on individual freedom than in his string quartets.

For me as a Brahms-performer, freedom is a recurring keyword. As a string quartet, we are part of a tradition of performing practice. And every tradition has its values, but also its possible pitfalls. When you just stick to your tradition, you might be less free than you think you are.

Searching for an interpretation that coincides with who we are as the Dudok Quartet, we thought it would be worth questioning our history and our habits. We asked ourselves: why do we play the way we do? How much freedom do we actually allow ourselves in approaching this “ancient” music? And how can we increase our freedom within the limitations of the musical “text”?

The great thing about being a professional string quartet is the opportunity to dive into these questions as deep and as long as you want. We started playing the music, and by playing I mean we started to approach the music as a game. We played this game for months and months. And the more we played it, the more freedom we found.

One of the things we did to find our freedom was changing our instrumental setup. We started playing with unwound gut strings. These strings forced us to rethink our approach to sound production, resulting in a more transparent sonority. And this transparency was extremely helpful for us in our search for freedom in the dense structures of Brahms’ music.

We also experimented with flexible tempi within the movements, playing with less vibrato and using portamenti as a means of expression. Not because we want to replicate the performance practice of Brahms’s time, but because we felt it adds to the meaning of this music today.

My ambivalent feelings about Brahms’ music have never changed. Unlike the approach to other composers, performing Brahms always contains a certain amount of struggle. As a performer, you always have the feeling you have nearly found the ‘truth’, just not yet. But by working on this album extensively, I came to the conclusion that the ‘truth’, if one can speak of that in the first place, partly lies within the struggle itself.

Brahms’s music is an incredibly masterfully constructed puzzle, and every time you play, you find new jigsaw pieces that you haven’t seen before. Every time I play Brahms, I catch a glimpse of this great, immediate significance that can’t be put into words. 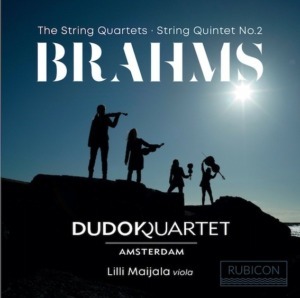