Borletti-Buitoni Trust
Back to Blog
20 April 2021

Attacca – The Aris Quartett meets the challenges of Old and New

It was to have been one of the highlights of 2020 for the Aris Quartett – our debut at Vienna’s renowned Musikverein with the world premiere of Attaca, a new work specially commissioned by the Gesellschaft der Musikfreunde (Friends Society of the Musikverein) written for us by Austrian composer Gerald Resch. We would have performed it on 28 March 2020 – the anniversary of Beethoven’s death – alongside his first Razumovsky Quartet (Op 59 No 1). But Coronavirus put an end to it all. 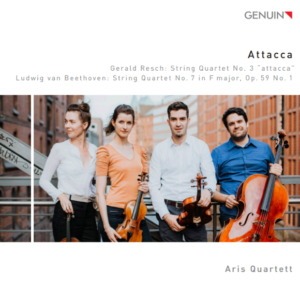 We had been looking forward to it so much and put in so much work and preparation. Everything fitted together so well, the programme, the place, the year, and even the day. So when it became inevitable that the concert could not take place, we decided to record a CD to pay tribute to this exceptional programme.

We first met Gerald Resch back in April 2019 when he came to a concert of ours at the Vienna Konzerthaus. We met afterwards and spent an inspiring evening together in stimulating conversation. It was important to him to get to know us as musicians as this was an opportunity to tailor make this, his third string quartet, especially for us.

Resch has integrated many elements that we appreciate in any work, such as incisive rhythms, gripping energy and strong communication between the individual voices. And it works so well with Beethoven. One of Resch’s central ideas is the attacca principle i.e. the seamless connection between individual sections and movements. Beethoven was one of the first to write works that are not just a series of movements, but whose parts combine together to form a larger whole. Resch succeeds in taking up this idea and telling a consistent story throughout the whole course of the piece. The connoisseur will also be able to discover a number of Beethovenian motifs. 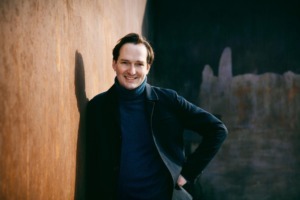 For us Attaca represents the first contemporary piece we’ve committed to disc. Music history is never finished, it is continually evolving. In this respect, we feel it is our responsibility to play new works and to inspire our audience’s enthusiasm for them. When contemporary works are integrated into a well-suited programme, they challenge and encourage one to listen. We ourselves have a great deal of fun continually discovering new things.

We have been asked which of the two works presents the greater challenge. Of course, Beethoven’s First Razumovsky Quartet is an enormous challenge and one of the most difficult works ever written for string quartet. On top of that, we are also confronted with the countless magnificent recordings that already exist. But as we work, rehearse and perform again and again, our own personal interpretation develops from a joint process in which everyone brings their own ideas and we try out many things.

So at first it seems easier to engage with a piece that has never been played before. But Resch also challenges us in many ways, for example with his extremely tricky rhythms and novel playing techniques. Technically difficult, but also delightful.

Of course, with Beethoven’s quartet there is also the question of a 40-minute time span, but we find that maintaining the tension is not much of a problem with this music because it is so varied and intense. The slow movement, for example, often seems to me the most beautiful thing ever composed, and not tiring in the least. With the three Op. 59 string quartets, Beethoven enters a new world; they are where he launches into the symphonic dimension, so to speak.

We would still like to play the full programme at the Musikverein, although this is uncertain at the moment because of a large backlog of cancelled concerts due to the Coronavirus. But we hope we will be invited again. However, we were able to give a small performance of Attaca at the Paul Sacher Foundation in Basel, which is a very special place with its huge reputation for contemporary music. It’s such a great experience to play something that is written for, and dedicated to us. I am certain the work will also bring a lot of joy to many other quartets in the future.

And during the summer of 2020 we did have some contact with audience at a multi-day residency in Hamburg’s Elbphilharmonie. There, as part of a film project, we had the opportunity to explore the sound of the building, which was empty due to the pandemic, and record music by György Kurtág in various locations throughout the premises. In the Elbphilharmonie and some other concert halls, for example in Paris and Stockholm, we also had the opportunity to record live concerts as videos and stream them. In this way our audience was always able to hear and see something current from us. But this can only ever be a complement, and never a substitute for the live experience. 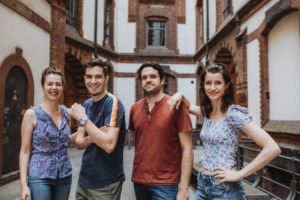 On the downside, ‘Covid year’ has seen some frustrations. For example, we had a major U.S. tour planned for April 2021. We were also set to make our debuts in Milan, Lisbon, Amsterdam, and many other important cities. That was, and is, a bitter experience. But we are looking forward all the more to when things are able to resume again.

Basically, we are optimistic that the situation will improve in the foreseeable future. But at the moment it is not really possible to plan. The important thing is that we have used the time well, rehearsed a lot, worked with composers, and made two CDs. But what we really miss is the emotional interaction with our listeners. We are longing for the moment when we can step on stage again in front of an audience.