Borletti-Buitoni Trust
Back to Blog
19 April 2021 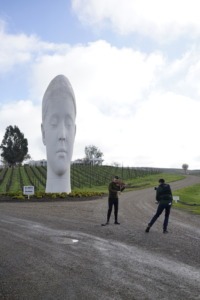 Alexi Kenney being filmed by Mike Grittani with Jauma Pensa’s Sanna as the backdrop at the Donum Estate, California

It was an early morning in January, cold by California standards, as I drove the hour north from San Francisco to the Donum Estate in Sonoma, California. This part of winter is one of the most magical times of year in the Bay Area, as the hills turn a blinding, spring-like shade of green, and days start out veiled and foggy but turn bright blue once the sun comes out. There is a feeling of possibility in the air, even present this year, despite Covid. That day had one of those beginnings, with wisps of fog rippling under and above the Golden Gate Bridge and partially obscuring the trees and dramatic cliffs along the drive. As I arrived at Donum and turned into their long driveway, the sun had started to peek out, and the giant white head of Jaume Plensa’s sculpture Sanna stared down at me. I stopped to marvel at it. This project was finally coming to fruition: I would be bringing a gorgeous new piece to life—Paul Wiancko’s X Suite for Solo Violin, which I commissioned and premiered—in a new recording and visual album. I hope the next few paragraphs will give you an idea of what this project has meant to me, and how excited I am to be sharing it with you.

I approached Paul Wiancko with the idea of writing me a piece for solo violin after being blown away by the two pieces of his I knew: American Haiku, for viola and cello, and Lift, for string quartet. I immediately fell in love with his music, and knew I had to ask him to write me something for solo violin. A year or so later and I had it in hand, a wildly creative and deeply personal seven-movement piece he called X Suite. Upon first read-through, I was taken on a journey with this piece, one I still feel resonates deeply with me and hopefully also will with you. The piece has virtuosity, fire, humour, and immense pathos, accomplishing all of this in a concise 17 minutes.

Right from the beginning, I felt that X Suite was a representation of myself in musical form, and after its premiere at Wigmore Hall in 2019, the idea of recording it became something I knew I needed to do. The recording took place in February 2020 just south of Los Angeles, at the beautiful Soka Performing Arts Center, on the same day as a recital I presented there in the evening. There’s something about recording a piece that’s never been recorded before, and one which was written with you in mind, that is extremely thrilling. You have a responsibility of course, to the composer and to yourself, but also have immense freedom to experiment, to sculpt the piece and the process as you wish, and know that there is no precedent you need to uphold and no one you have to follow in the footsteps of. I found the whole experience to be joyful, not a word that often comes to mind when it comes to recording. 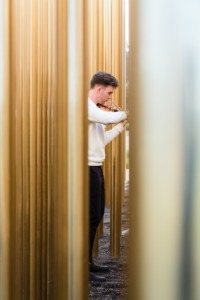 The idea of filming a visual album came to me last year during an afternoon being inspired by Billie Eilish’s music videos. A different genre of music than mine, to be sure, but I was struck by her artistry, and the visual stories that her videos told. I’ve long been a fan of music videos by great artists of other genres, but rarely see them done in classical music. I began to think, wouldn’t it be fitting to create an epic video for X Suite, a piece rooted in traditions of the past and yet extremely contemporary in feel? Sculpture immediately came to mind, and I started searching for the perfect place, with pieces of art that were big enough to envelop me and that I could interact with as if they were an acoustic. And that’s when I found Donum.

Not in my wildest imagination could I have imagined a more perfect place to film. Donum is a private winery and sculpture garden, spread out over many acres, which houses over a dozen important sculptures, many of them site-specific. The seven sculptures I chose were consciously and specifically selected to complement the feeling of the movements of X Suite within the whole. It was important to me that the sculptures be different enough to reflect the standalone qualities of each piece of art and each movement, but with enough similarities to provide a through-line for the viewer, just as there is a through-line for X Suite as a listener.

Central to my ethos as an artist is the holistic nature of art; that, no matter the medium, us artists are all trying to chip away at existential questions of life, emotion, and humanity. I love when art speaks across genres and makes connections between senses. When done with intent and intelligence, this can open the mind and heart in a deeply compelling way. I will let you, the viewer, draw your own connections between the artworks, and encourage you to listen and watch more than once to pick up on the subtleties that exist within the music, as well as those visually highlighted by the film between the music and the art, and amongst the artworks themselves. I hope you feel the great love I have for this piece, and the sculptures in their beautiful landscape, as captured by filmmaker Mike Grittani. 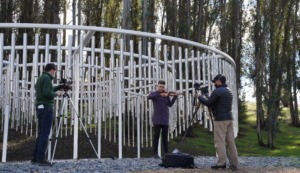