Borletti-Buitoni Trust
Back to Blog
01 September 2020

#BBTathomeforawhile –
Nobody Dares to Cough!

Some five months on since my last concert I now find myself once again waiting in anticipation to go out onto the stage. Sweat is forming on my palms, my heart is pounding in my chest, cello in my hand but this time there is the unfamiliar addition of a face mask in solidarity of our strange times. What a great feeling it is to be back on stage!

March was the last time I had performed in public, following on from a year of extensive touring with each day blurring into the next. The unseen reality of a musician’s life is an endless stream of hotel rooms and backstage areas that become indistinguishable from one another. The concerts are the relief from this monotonous pattern, allowing me to feel alive and present again, but the travelling slowly takes its toll.

However, the highlights here and there punctuate my memories, such as on a swelteringly hot day in March we were performing in the UK at a gorgeous castle dating back to 1750. I was tired and grouchy, having just arrived back in Europe from a two-week tour of the US and Canada. Jet-lagged and hungry, my colleagues and I walked onto the stage to see our audience crammed like sardines, making use of every last bit of available space. We were on our last legs, but concerts always seem to give you access to the energy you didn’t know was there. This concert turned out to be rather memorable as it had come with a surprise. Midway through the first half, I noticed a gentleman in the front row starting to faint. I stopped my colleagues to bring attention to the situation and as soon as Lea, my violinist noticed she stood up and boldly said “we have a doctor in the building, please come and help!”

I asked her exactly how she knew there was a doctor on hand but before she could reply, and much to my surprise, there was my best mate from way back in music school, now a doctor, running to the rescue. He had come to my concert to surprise me, and what an entrance it turned out to be! In five years of performing, we have never had anyone fall ill at a concert but as my friend said afterward: ‘if you bring a doctor, you’ll need a doctor’. Once the audience member had been revived and given a clean bill of health, I introduced my friend to the audience for a round of applause, gratitude he deserves ten times over for his work over recent months.

As with many areas of life, classical music, and the performing arts, in general, has struggled in the time of COVID. Live music is slowly and tentatively re-emerging from its enforced hiatus but not with its usual tropes. The packed concert hall, bustling intervals of wine consumption, and the infamous and incessant coughing between movements are becoming a distant memory.

For my return to the stage, I found myself in the spectacular large hall of the Berlin Konzerthaus, with its gold-leaf murals, a spectacular organ with 5,811 pipes, and beautifully red upholstered seats fit for royalty. Designed for an audience capacity of 1418, its walls are designed to fill with the enormous, powerful sounds of the great Berlin-based orchestras. Now it was my ensemble, the Amatis Piano Trio, that was given the task of filling this vast hall with music. To accommodate these times the audience was restricted to just 271, each person spread out to maintain a safe distance. Even on stage, we were required to sit at least two metres apart, which was carefully and rather comically measured out with typical German precision before our rehearsal. 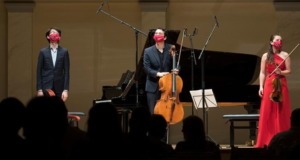 I cannot deny I was nervous in the days leading up to this return to live performing. Not the excited and nervous feeling that is usual for me but more the dread of the unknown, the slightly unfamiliar nature of what was to come. For me nerves like that are rare, but so is such a long break away from the stage and the prospect of filling this huge and sparsely occupied auditorium with sound. This feeling was intensified by my dream the night before in which I was on a stage and had just begun performing with my colleagues. Suddenly everything unravelled. Lea, my violinist, and our pianist Mengjie started coughing uncontrollably. They were both dragged off the stage, leaving me to continue alone, playing simple baselines from Haydn trios, much to the chagrin of the audience. A silly dream and it did nothing to help my positivity the following morning.

The programme for this concert was challenging and new to us, designed to celebrate the Viennese school of music. Usually, in a trio concert, this would mean the joyous experience of Haydn, Mozart, and Schubert, but for this concert we were tasked with the music of the Second Viennese School and composers such as Webern and Schoenberg. This is not the most palatable music and I was anxious about taking such programming risks in this unfamiliar environment.

After my restless night’s sleep, a lot of practice and a tangle with my face-mask straps, there I was standing between my two colleagues waiting for the stage manager to give us the green light. After what seemed like an eternity she gave us the nod and opened the door to reveal the concert hall, 271 people, and 1147 empty red seats in all their glory. The audience were dressed in their elegant evening attire, paired with a less than flattering blue face mask just to be sure no one could forget the world we now live in. As my colleagues and I took our first steps out onto the stage the applause steadily rippled through the concert hall with the slow realisation that we had emerged from the wings. 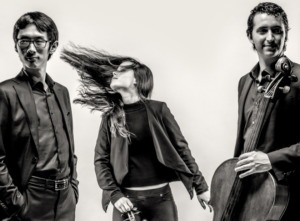 As the applause grew to a volume that seemed to trigger me into an old and familiar headspace, it suddenly seemed as if merely hours had elapsed since I was last in this position all those months ago. We immediately sensed a different mood from the audience to anything we had previously experienced. They seemed so grateful to be hearing live music again and this engendered a concentration and intensity that was quite remarkable. Music that is usually challenging seemed to make perfect sense in this new context. The hyper-distilled styles of Webern and Schoenberg, music which wastes not a single note and has all its fatty bits trimmed off leaving only the most intense moments, seemed to connect so well with an audience that had seen little but a 24-hour news cycle of doom and gloom during recent times. You could hear a pin drop in the silences as the tension throughout the hall was palpable. Between movements there was not a single cough, stifled so as not to stoke fear amongst their fellow audience members. Between the three of us we had a sense that we could take risks with the music like never before with an audience that was so alert and attentive.

At the start of the concert it seemed like the audience had been shaking off the cobwebs after months of inactivity. By the end they were thoroughly warmed up and they filled the hall with thunderous applause. It was as if they too were excited to express themselves after months of isolation. It was a truly beautiful experience.

The recent months since the world has been gripped by the pandemic, I and many other musicians have been searching for the answer to the question: ‘why do I play music?’ For me music has always been an idealistic pursuit and I would play music regardless of whether or not I had anybody to listen to me. However, recent times have made me more aware of how lucky I am to be in a position to play for people and share the live experience. To create connections with an audience and celebrate some of the greatest music ever written is a real privilege. Yes, it is a great feeling to be back on stage!