Borletti-Buitoni Trust
Back to Blog
01 June 2020

During the first half of May I was supposed to be in Guadalajara, Mexico performing my first complete Beethoven sonata cycle in Latin America. With so many cancellations at present it was a relief to discover that the festival there wanted to go ahead with somehow recording the whole project at home for online transmission. 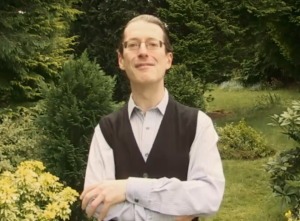 I had played at the Festival de Mayo in Guadalajara once before in 2015 and was very taken with the warmth of the reception and the amount of young people that came backstage for autographs afterwards. Indeed, there was a higher proportion of young people in the audience than anywhere else I’ve visited. So I was looking forward to going back. However, I was glad to give temperatures in the 90s, Mexican food for a fortnight and changing planes at Houston a miss!

Almost every performing artist seems to be making home-videos at the moment and naturally the quality of the sound often leaves a lot to be desired of course so we were very lucky to have been able to involve Signum Classics, my record company. Their extraordinary sound-engineer, Mike Hatch was looking for something to do during lockdown and a new challenge so he set up a studio in the living room. I once did a recording session with Mike when he had eighteen microphones on the go so he’s not the sort of person that’s going to be content with one mike when four will do! There was also a static camera on a stand facing the piano for nearly three weeks.

Mike has worked on some pretty challenging projects before, including recording Peter Grimes on the beach at Aldeburgh. This was one of the strangest however as mikes and cameras were controlled from London, 200 miles away. Indeed, there wasn’t even telephone communication involved, just a ‘ping’ in the computer at 2pm on recording days and Mike would suddenly ‘appear’! 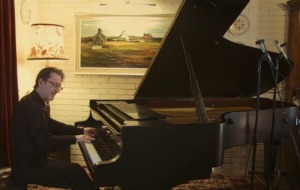 I was slightly dreading the fact that there wouldn’t be a live audience. Naturally it is harder to create new ‘spur-of-the-moment’ special moments when you’re stuck in the same space as your everyday practice. Some tuning issues at the top of the piano were driving me slightly nuts beforehand so my technician Paul, stuck in lockdown in Birkenhead, sent some bits of felt through the post to try and mitigate them and reminded me that Beethoven’s pianos no doubt would have been seriously out-of-tune (and that he wouldn’t have been able to hear them anyway!)

As it is very difficult to do a lot of editing when there is only one camera involved, I had to get into performance mode very quickly, only repeating five or six of the Finales when I wasn’t entirely happy with my first attempt. Surprisingly, the adrenaline level seemed to come from somewhere as soon as I changed into a concert shirt and when Mike switched on his red light it turned out to be a very enjoyable experience. 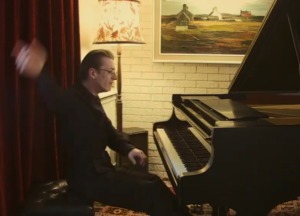 I recorded all the sonatas for Signum some four or five years ago and spent such a lot of time and effort getting them as good as possible for this that I was reluctant to change my interpretations as I didn’t want the CDs to be superseded. (As soon as I think they’ve been superseded I don’t want to hear them again!) However, it quickly became apparent that staying in the same place interpretively is not possible for a real musician so I gave up using my existing versions as yardsticks and tried to look at the music from a fresh perspective.

For instance, in the second movement of the op.78 sonata there are these very fast semiquavers which are all slurred in groups of two. On the CD I tried to play even semiquavers but it’s not possible to make sense of the slurs at this speed so for the new version I’ve altered the rhythm slightly so that we hear the slurs. The discerning listener will have to compare and contrast the two versions!

When the mikes and camera had gone back to London it was a feeling of anticlimax for a while (as is the case after all Beethoven cycles), made worse by the fact that you don’t know when the next lot of work is going to come in during these difficult times. The response to the transmissions has been very positive however, a way of bringing people together throughout the world and I hope that we’ll be able to find a way of making use of the performances in future.

When I was asked to record a Beethoven piano sonatas cycle in lockdown my first thought was that this would be virtually impossible to achieve. However, with a bit of experimentation in my garage and after discussing it with Llŷr, I devised a system which would enable me to make the recordings entirely remotely once the equipment was installed at Llŷr’s house in Wales. 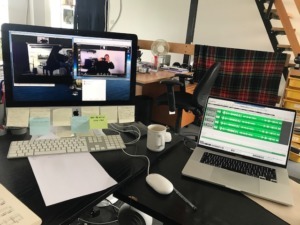 Thanks to the ability to be able to “tunnel” remote control commands over the internet I was able to operate both the audio and video recording machines from my home in London. In order for me to communicate with Llŷr I also left a laptop set up in his lounge and we used Zoom tele-conferencing which meant that I could see him and he could see me at home. I had to control the laptop remotely so the strangest thing was that I had to call myself on Zoom and then answer my own call remotely in order to start the session! After each “virtual performance” I uploaded the recordings to my system in London ready to send to Mexico.

We did all the Sonatas in complete performances, just as if Llŷr was giving the recitals as originally planned. Although Llŷr’s piano is smaller than a full sized recital Steinway, I personally found that the sound was very appropriate for the Beethoven sonatas, You get extra clarity and detail on a smaller piano like this and for these pieces I think that works well. In fact I feel that this piano has a sound that would have been more familiar to Beethoven were he to hear it than that of a full sized model. 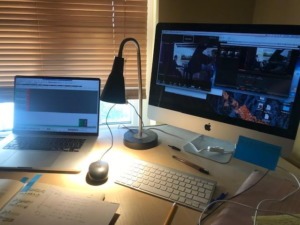 Llŷr is such an accurate player that it was a real pleasure for me to make these recordings and a revelation to hear all the sonatas played so expertly over the short period of time that we recorded them. I very much hope that the listeners will enjoy them as much as I did while I was recording them.

Llŷr’s Beethoven Unbound box set is available on Sigmum Classics, to be followed by his Schubert box set (currently available for download) which, in CD form, will be available later in the year.

With thanks to Festival de Mayo, Mike Hatch and Signum Classics.