Borletti-Buitoni Trust
Back to Blog
20 May 2020

Over the past months since the first BBT Communities grants were announced in June 2019, we have been getting to know the five organisations across Europe. Indeed, our chief executive Susan Rivers was to have been writing a blog about visiting all of them, having been to Berlin to see MitMachMusik with our founder Ilaria Borletti-Buitoni at the end of last year. Visits to our two Italian BBT Communities, also with Ilaria Borletti Buitoni – to Milan for Sistema Lombardia and to Naples for Santitansamble – were kyboshed in April for all-too-obvious reasons, as was a separate meeting with Music as Therapy International here in London.

Thankfully, however, a long-standing plan to make a film with the City of London Sinfonia, focusing on three facets of their Wellbeing programme supported by BBT, went ahead. Fortunately, filming commenced in the last week of February, shortly before lockdown. While now looking as if it has come from a different world (who said that the ‘past is a different country’?), it also acts as a powerful reminder about the human necessity for interaction. You can see the film – the focus of our BBT spring eNewsletter – here.

So, what to do in the lockdown? While the projects at St Christopher’s Hospice and Bethlem and Maudsley Hospital School had, perforce, to be curtailed temporarily, the ever-resourceful team at City of London Sinfonia came up with #ComfortableClassical at Home streaming biweekly half-hour concert-recitals from their players’ homes. These started remarkably quickly, on 26 March, on a beautifully sunny spring day. In an al fresco setting, overlooking the fields adjacent to her house, the star of our video, Katherine ‘Waffy’ Spencer coped with the wind (blowing her music over the fence, rescued by her cameraman son, Red) and a publicity hungry hen, Fifi. I asked Waffy some questions by e-mail, questions later replicated to other players.

“The idea grew out of a type of concert that CLS were already offering at some theatres in London called Comfortable Classical. The original idea designed by our participation team was that the concerts should feel as though we are doing it in someone’s front room for all the family, from grandparents to grandchildren and that everyone should feel relaxed to respond as they would in their own homes – moving about, chatting and drawing on the floor etc. in front of the fire. Well, as you can see from the description it really wasn’t very hard to move that concept literally to peoples’ front room. Our participation team – Fiona and Fi – called upon the core players that had already been involved n Comfortable Classical so that the transition was smooth.” 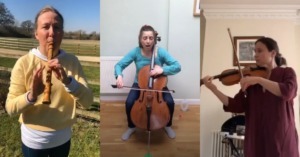 You’ll see other instrumentalists from our film in the #ComfortableClassical playlist. Oboist Dan Bates opted for the pristine white of his new house for his first broadcast, then donned a hat for his second. He was typical in commenting that this was virtually (in two senses) new to him, admitting that it was a step up from basic social media stuff he’d done. Another Dan, trombonist Dan Jenkins, who’d never done a live transmission, admitted he had adopted a motivational mantra to get before the camera (“… Just don’t think about it, just don’t think about it…!”), while flautist Karen Jones encapsulated the growing enormity of it all: “I had only given two lessons on line and one masterclass. I had never DREAMT of doing a live performance on line, LET ALONE given a live performance online, LET ALONE A SOLO ONE!!!!!”

There was a free hand given to structure and repertoire. While Waffy’s first broadcast to the nation was based around Stravinsky’s Three Pieces for Solo Clarinet, others have gone off piste with improvisations and transcriptions of folk and pop melodies. Most report wanting to be upbeat, as a tonic in lockdown times. Bassoonist Ursula Leveaux, streaming from her home in the Lake District summed it up nicely: “I started with the things I enjoy playing and out of that came some other ideas, using some of the music I had come across partly as a result of having more time at home. I didn’t want to play anything too technically difficult as I felt that if I was relaxed then the audience could be.” 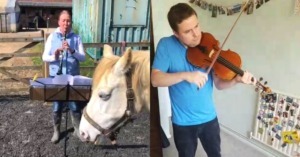 There may be a sense of competition as well. It is very clear how collegiate the City of London Sinfonia is – not least because they all seem to tune it to each other’s live streaming. Following on from cellist Rebecca Knight recording a track which she could then play live to, violist Matt Maguire, for his second episode, not only played duo with his cellist partner, but also recorded them both so they could come together to play a slightly unorthodox (two violas/two cellos) version of Beethoven’s Op 74 String Quartet, nicknamed the Harp. 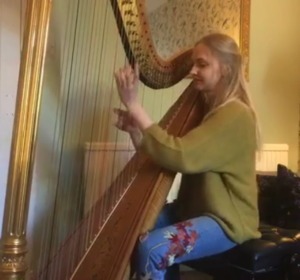 Oh, and talking about the harp, I learnt more about this magnificent instrument in Elizabeth Bass’ presentation – not only its history but its mechanics – than any book could tell me. You really did get a close up and in depth feel for the instrument.

Cellist Joely Koos, in her first episode, not only roped her instrument-playing family in, but also gave us a premiere in excerpting baritone Roderick Williams’ Sonatina for two cellos. In her second she built up a programme based around food. Another first was Alexandra Wood playing a movement from Huw Watkins’ Partita with Huw watching live!

All in all, we’ve had a virtual orchestra (trumpet, horn, percussion and double bass aside), even though it’s only the bassoon section that has been fully represented (with Chris Rawley following Ursula Leveaux). We’ve had a number of repeat offenders – Joely Koos, Alexandra Wood, Matt Maguire and Dan Bates – and, just before half term Waffy returns for her third broadcast, after which there’s a break for half term holiday.

All episodes are available to watch whenever you want to here.

Finally, I asked “How might the experience of doing #ComfortableClassical at Home have on future live Comfortable Classical concerts/events?” Both Dan Jenkins and Matt Maguire are more relaxed about the idea of doing them, while Dan Bates clearly feels that “all of our ideas for online could be modified to present live versions.” Ursula Leveaux sees a longer-lasting effect: “I think it will have a huge effect on the orchestra. I think it has given confidence to, and helped the rest of us recognise, many talents within the orchestra that there aren’t always entirely visible in the ‘ordinary’ concert giving context. The ‘normal’ Comfortable Classical Concerts are a perfect environment for much of this talent to have the opportunity to develop and I think those will become even more imaginative as a result of all we have learnt through the @Home series. That in turn will, without doubt, feed into everything else that the orchestra does.”

And that can only be a good thing.

View all the available #ComfortableClassical at Home here