Borletti-Buitoni Trust
Back to Blog
06 May 2020

#BBTathomefor a while –
Musing on Masks

Bas les masques is a French expression from the 17th century with origins in theatre where a mask was an accessory of deception. The idiomatic English translation is ‘no more pretending’.

Well, there’s certainly no more pretending about Covid-19 and the fact that coming out of lockdowns around the world will be slow and gradual. I predict that the wearing of masks may become more or less obligatory in public spaces, in which case a home-made mask would be the requirement in the UK as surgical masks are strictly for workers in the NHS and other frontline professions. 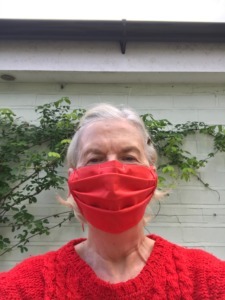 So, I got my sewing machine out and raided my rag-tag bag of materials and various other sewing accessories and got to work on making double thick, reversible masks that can be boiled and washed time and time again. My initial intention was to sew them for friends and family, including BBT colleagues Nick and Susan. Nobody asked for one – I just decided that it’s better to be prepared in advance. So far I’ve churned out more than 25 and I am now getting requests and orders. They are not exactly fashion statements or designer masks, but at least they are all different and brightly colourful on the whole (I’d get bored if I had to make them all out of the same material and trim!) and I did make them according to the Covid-19 ‘rules’. 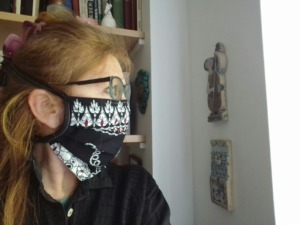 I wore mine for the very first time in public the other day when I ventured out to shop for the week’s groceries and I have to say that it takes some getting used to. I found it rather hot and my glasses kept misting up. And it’s a big barrier to social intercourse, usually enhanced by facial expression. I will admit to a sneaky, slightly smug feeling of being a responsible citizen and taking the whole situation seriously while, at the same time, feeling somewhat ridiculous and rather dramatic, if truth be told.

I’m not going to debate the subject of whether or not we should be wearing masks for Covid or whether they are a help or a hindrance when it comes to protection – it’s a divisive topic (like so many these days). But I did start musing on the history and purposes of masks.

Aside from strictly medical use, where the modus operandi is to protect against contagion, they can be worn as a disguise, to protect identity. Masks are also used to create identity, especially in so many traditions of theatre, opera and other forms of ritual around the world. But what I have found interesting in my digging a little further into this subject, is the connection between medicinal and theatrical, necessity and decoration.

In ancient Chinese festivals and rituals for example, monstrous and ugly masks were used by exorcists to frighten away ghosts, which were believed to embody pestilence, disease and evil. In Japan too, masks in theatre and dance are archetypes borrowed from myth, ancient dances and Noh theatre. Of particular interest to me are the Tengu masks, fearsome red faces with angry expressions and, most characteristically, a long red beak which gave them a bird-like appearance. Nowadays, in modern Japan, the beak has become a long red nose, but the original purpose was to frighten away those bad spirits and the pestilence they carried.

What is it about birds and beaks? Read on… 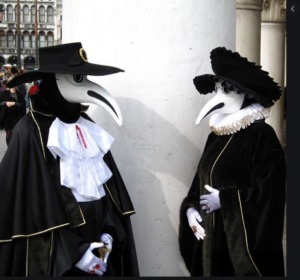 Another sinister bird mask, an iconic character at the world famous Carnevale in Venice, is that worn by the medico della peste (‘plague doctor’). Along with more light-hearted characters such as Arlecchino and Colombina at this annual Venetian jamboree, the medico is still one of the most popular historic types of mask and costume. The origin of this rather menacing ‘bird mask’ harks back the 17th century when La Pestilenza (Black Death) devastated almost one third of the Italian population. It was in fact invented by a French physician, Charles de Lorme and functioned like a primitive form of gas mask to protect the plague doctors from the evil odours that were thought to carry the infection (‘miasma’). The long hollow beak was filled with spices, herbs, camphor and other aromatic substances to purify the air they breathed. But why a bird? I wonder if birds were considered to be the source of the disease as they obviously travelled and migrated long distances? Ironically, it was more likely the doctor’s full-length heavy coat and gloves that protected him from fleas (the actual carrier of the plague) reaching the skin.

One more musing on masks – more of a modern cultural phenomenon. Asian populations began wearing masks in earnest some 100 years ago after the devastating Manchurian pneumonic plague in 1910 (followed by Spanish flu in the west). From that time masks have been donned to protect against pollution and allergies and also, out of courtesy, to inhibit the passing on of colds and flu. As a consequence mask wearing has become a social ritual with an obligation to protect the wider community. And everybody wearing a mask – something which obscures individuality – also gives a sense of solidarity, a sense of ‘being in this together’. Nowadays, as with theatrical and carnival masks, they have become fashion statements too, especially among the young generations who like to embellish and personalise them. They are big business in Japan, China and South Korea.

The deeper you go, the more fascinating masks become…

Susan looks as charming as ever, but we do think Nick looks a bit menacing!

If you would like to join the masquerade, here’s the pattern I followed from Goodhousekeeping.

BBT masked (and, in reality, very much socially distanced)