Borletti-Buitoni Trust
Back to Blog
09 November 2018

The setting was a rain-swept, autumnal Sunday afternoon in the historic Umbrian hilltop town of Perugia in Italy.  The frequent downpours did not deter the hordes of people crowding into the centre for the annual Euro Chocolate Festival – and nor did it deter the audience that turned out for this special Borletti-Buitoni Trust 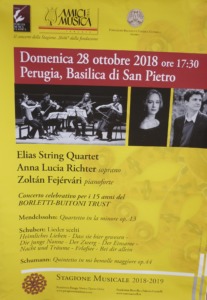 The idea for the concert was conceived over a year ago when the BBT team decided it was time we organized another showcase for some of our award-winners and also acknowledge the fact that the Trust has now been going 15 years.  During that time BBT has built up a roster of more than 100 individual musicians and ensembles from more than 30 countries around the world, all of whom we have proudly supported in their creative endeavours to develop their careers.

Just as important, this was an opportunity for BBT to pay tribute to Franco Buitoni, co-founder of the Trust with his wife Ilaria, who passed away in August 2016. Perugia was Franco’s birthplace and lifelong home.  He was a well-known figure in town and throughout the region, not only because of the Buitoni pasta business established almost 200 years ago, but also because of his lifelong dedication to music. When he died, tributes came from many arts and music walks of life, from Umbria Jazz to Amici della Musica Perugia.  Indeed, the BBT concert was presented by Amicia della Musica, a society established by Franco’s mother, Alba, after World War II.  Some say that she developed almost single-handedly the musical profile of Perugia over the four decades that she directed the Amici organisation, bringing many of the world’s most important musicians and composers to this small town, and Franco continued the good work for another 30 years.

Another poignant aspect of the event was the venue – the magnificent Basilica di San Pietro with its rich acoustic and astounding frescos and paintings covering every inch of the ceilings and walls. This church was the place of worship for generations of Buitonis and where Franco’s funeral service took place.

The concert was devised by two of Franco’s longstanding and dear friends – Andrew Starling (Music Consultant to Perugia Musica Classica and BBT Artistic Committee member) and international pianist Mitsuko Uchida (Founding Trustee of BBT and Artistic Committee member). The works chosen were especially dear to Franco’s heart.  Franco’s widow, Ilaria, welcomed the large audience which, as well as general public, comprised BBT trustees, friends and associates who had flown in from various places for the occasion. 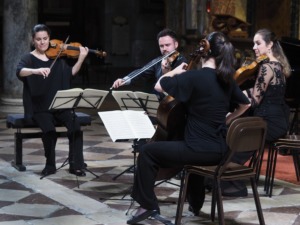 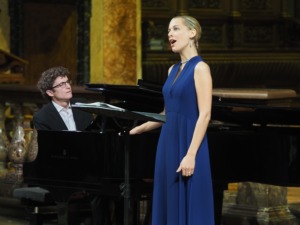 The Elias String Quartet opened with Mendelssohn’s ostensibly youthful first-composed String Quartet in A minor, Op 13: he was just 18 when he composed it (though, confusingly, it was published second, so known as No. 2).  The Elias takes its name from one of Mendelssohn’s most famous works, the oratorio Elijah, and it was no surprise that sisters Sara and Marie Bitlloch (violin and cello), violinist Donald Grant and new-to-the-Elias violist, Simone van Giessen, opened the programme with a work so close to their hearts.  What mature music for such a young man!  Every emotion seemed to tumble forth from the four instruments, their individual players moving in sync as Mendelssohn’s music filled the warm acoustic of the Basilica.  You could imagine a spurned love following an ecstatic dalliance: heartache amidst youthful exuberance, with the slow movement the aching heart of the work.

Prior to the concert, the Elias had spent a week on a musical retreat above Lake Maggiore (an additional gift from Ilaria Borletti Buitoni open to all BBT winners) and the quartet’s co-ordination was immaculate.  The concert was off to a flying start.

Two 2016 award winners – German soprano Anna Lucia Richter and Hungarian pianist Zoltán Fejérvári – took to the stage next for two short sets of Schubert Lieder.  The whole gamut of emotions followed: from the rapture of the two opening Lieder   – Secret Love (D 922) and That She Has Been Here (D775) – to the horrific Grand Guignol tale of The Dwarf (D771) drowning the Queen for being unfaithful to him, the constant piano accompaniment emulating the seething sea in which she meets her maker.  There was a slight tweak to the running order, as the turbulent piano of The Dwarf was too alike to the tortured accompaniment to The Young Nun (D828), which only settles as she forsakes the storm and heads to the bell-tolling tower of the nunnery.  The first set ended, instead, with The Solitary D800, with its trotting accompanying rhythm, ostensibly extolling the self-contained life of a loner, but eventually hankering after a more exciting life, whilst having to make do with the chirping of crickets for company.

The second set opened with Night and Dreams D827 – blissful rather than nightmarish (The Dwarf changed that mood) – before Richter and Fejérvári ended with a return to the happier side of love, with the slightly bittersweet Lake Erlaf D586 (the earliest song of the selection, from 1817) topped by the positively playful With You Alone! D866.

Richter sings with a purity of tone matched with a rather mischievous dramatic sense, bringing each of the songs and their different worlds evocatively alive.  Fejérvári was with her all the way, espousing all the best qualities in supporting his vocal partner.  A joy!

After the interval, Fejérvári was joined by the Elias for Schumann’s effervescent Piano Quintet Op 44, composed in the full swing of married bliss.  Performances can sometimes drive rather harshly through Schumann’s buoyant melodies, but here there was winning warmth to both the interpretation and playing – much laughter had been heard during rehearsals – leaving one to conclude that this music should be available on prescription to cure a whole load of ills. 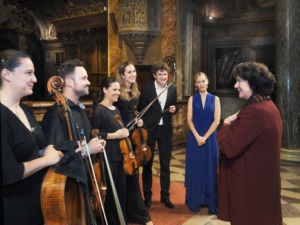 But that was not all.  Originally the plan (yes, the encores were planned!) was for Anna Lucia to sing with the Elias – as the only combination of players not yet explored – and Aribert Reiman’s string quartet versions of Mendelssohn songs would bring the concert full circle.  But during rehearsals it was suggested that it would be unfair to leave Fejérvári out, so he subtly interwove Mendelssohn’s original piano part.  Richter announced the two songs they did with special thanks to Ilaria and, by extension – of course – to Franco.