Borletti-Buitoni Trust
Back to Blog
06 November 2018

How Mendelssohn, Prokofiev, Janáček and Golijov speak for our troubled times

In an article written for The Arts Desk, reprinted here with permission, the Calidore String Quartet contemplates music for its torn nation, as collected together on its debut Signum Classics CD, Resilience, supported by its BBT Fellowship 2016. 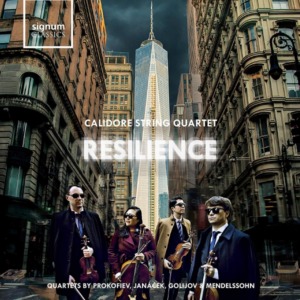 Classical musicians spend much of their lives inhabiting the realms of the past. To effectively practice and perform the music of Bach, Brahms, Beethoven and countless others, performers must combine research and personal intuition to time travel into the era of these great composers’ lives. After months of exploration, as one begins to comprehend the social customs, politics and science of the era, a clearer understanding of the composer’s individual personality and musical aesthetic begin to emerge.

Many performers spend their entire life unravelling issues such as how Beethoven’s undiagnosed personality disorder affected his dramatic dynamic and harmonic shifts or how the death of Bach’s wife influenced the three-part structure of his Chaconne for solo violin. The resulting performance strives to resurrect a voice of the past for today’s audience that carries with it all of the wonderful and the difficult experiences of that individual’s life. As our quartet realized in the aftermath of the 2016 US presidential election, listening to and reliving these past human experiences can provide a potent message for the present.

As a classical string quartet with our thoughts buried in the preceding centuries more often than our own, adjusting to the events of today can be jarring. In the months leading up to the election, it was difficult to find the peace of mind to do our daily time travelling. The present had a vice-like grip on our attention. Americans were swept up in a rift that divided us along political, racial, cultural, economic and religious lines. Millions marched and protested. The violent scenes broadcast in the election’s aftermath recalled to our generation of millennials too many unpleasant chapters of our history books. We failed to grasp that we too would have to experience life in such an uncertain time.

In early November 2016, we performed a tour of concerts on the West Coast of the United States. Masses of protesters often enveloped our path to each evening’s concert venue. By the end of our concert in Portland, Oregon just days after the election, a demonstration downtown turned violent, leaving several people injured. Even the hallowed ground within the concert halls, which usually serves as sanctuary from the troubles of everyday life, was not immune to the tumultuous and uncertain feelings pulsing through the heartbeat of our nation.

We could feel anxiety and confusion in the audience’s distracted applause as we walked on stage during that tour. Trying not to take the greeting of the audience too personally, we held fast to the classic showbiz mantra, “the show must go on.” Thus, night after night we witnessed the transformative power of Mendelssohn’s final string quartet, his Opus 80. Coughs and programme-rustling were notably absent. Were it not for our playing, one could have heard a pin drop. Mendelssohn’s expression of sorrow, frustration, anger and nostalgia seemed to resonate with the emotions brewing in our audience.

The lighthearted charm and optimism of the familiar Overture to A Midsummer Nights’ Dream and the Octet for Strings are totally absent from Mendelssohn’s final string quartet. Op 80 is instead filled with anger and grief uplifted only by fleeting moments of nostalgic hope. In 1847, Mendelssohn’s sister Fanny died suddenly of a stroke. She was his closest friend and musical collaborator, and her death devastated him. The F minor quartet’s first and second movements evoke unrelenting pain and frustration through repeated accentuations, furious tempos and Mendelssohn’s use of the dark and gloomy key of F minor. In contrast to the storminess of the first two movements, the third movement of Op 80 is a reprieve from the onslaught of grief. In a warmly nostalgic episode, Mendelssohn seems to reflect on happier moments he shared with Fanny.

The movement is filled with tender and graceful musical gestures. The primary theme is a sorrowful but sweet melody that recalls Mendelssohn’s widely celebrated Songs Without Words. Perhaps it was this anthem that spoke most poignantly to the audience that night, because at the conclusion of the virtuosic finale the Portland audience leapt to their feet with enthusiastic applause and cheers. It seemed that Mendelssohn’s music expressed and released – if only momentarily – the anguish we were all experiencing about the state of our divided society. 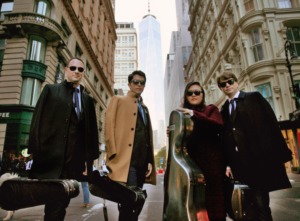 Did Mendelssohn’s Op 80 resonate so unanimously with our audiences because its sentiments paralleled those of our current time? Using Mendelssohn’s work as a starting point, we decided to compile and record a collection of voices of the past who toiled to express music in the face of tremendous conflict. In this way we hoped to express our own dismay about our divided nation and console the people of our increasingly fragmented world.

We explore musical narratives by three other composers living through deeply troubling conflicts – either external or internal: Sergei Prokofiev’s String Quartet No. 2 in F Major depicts an escape from the Nazi eastern offensive in WWII while Leoš Janáček’s String Quartet No. 1, “The Kreutzer Sonata”, portrays the struggle of a loveless marriage. Finally, Tenebrae written by the contemporary composer Osvaldo Golijov expresses the horrors of a life caught in the crosshairs of violence in the Middle East. In some of the most difficult times of their lives, these composers turned to music to vent anger and fear but also to express tenderness, hope, and optimism.

In recording these pieces, we opted to remove ourselves as much as possible from the din of dissonance that encircled us. We crossed the Atlantic and headed for the idyllic Suffolk countryside in England. Surrounded by livestock and the beautiful colors of fall, we spent three days with our incredible engineer Mike Hatch and producer Tim Oldham to record these string quartets for the Signum label. One evening, a purple and crimson sunset filtered through the windows of our studio as we began to record the peaceful chorale opening of Golijov’s Tenebrae. Though much of the piece recounts living through violence in the Middle East, Golijov explains that this passage of the music evoked the memory of taking his son to the New York City Planetarium. His son had expressed awe in seeing the earth as a blue dot orbiting in space for the first time. The light of the sunset streaming across the tranquil rolling countryside perfectly embodied the innocent and celestial nature of the music which we were aiming to express.

After the days of recording in England we returned home to New York City where inevitably the rhythm of everyday life resumed. Rehearsals, subway travel, work, dinners with friends. (Yet on the news and in the streets the signs of our torn nation stubbornly pronounced themselves.) Reading through e-mails on the train though, I came across a Dropbox link to a recent quartet photo shoot. The photos were taken in various locations across New York City. 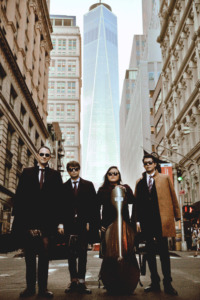 The last batch of photos was shot in front of the Freedom Tower built on the site of the World Trade Center. Looking over these photos I realized that the composers from our album and the Americans who lived through 11 September shared something in common. When tragedy and chaos descended, these people did not give up. The same resilience embodied in the magnificent music they wrote is symbolized in the building of the Freedom Tower. As humans, it is necessary to give voice to the anger and frustration of loss or difficulty, but we also possess an inner strength. We must write, rebuild or, if necessary, time-travel to let our resilience shine – it is in expressing and even recording our experiences that we pave the way for a brighter future.

Listen to extracts from Reslience here.