The Bag’s the thing…

People who know me well know how much I value and love practicality in all areas of life and work. We at BBT love to come up with ideas to keep getting the word out about the Trust and how proud we are of all the wonderful musicians we have assisted with BBT awards and fellowships. So, if we can actually come up with something useful at the same time… even better.

This year we decided to produce another good strong shoulder bag sporting the names of our award winners since the beginning in 2003, right up to the latest young musicians added to our roster earlier this year. In BBT colours of red and white on black, we listed the names over 100 musicians and ensembles from all over the world.

Apart from the practicality of the bag itself, the list is a way of also reminding our BBT award-winners of the family of amazing musicians they are part of. We do try to keep in touch with them all and see them when we can, but this is ‘out-there’ proof that certainly not one of them is ever forgotten.

So we couldn’t have been more delighted to see Dutch recorder player, Erik Bosgraaf (alphabetically top of the list of our winds section) tweeting a picture of said BBT bag, spotted by a friend at the Parnü Summer Festival in Estonia this July.I happen to know it was being sported by David Nice, music editor and critic of The Arts Desk, because I had given him one personally when I was at the East Neuk Festival at the end of June and that’s where he was headed for next. As well as enjoying the concerts and scenery in this beautiful part of Fife, I also caught up with  BBT award winners Julian Steckel, Pavel Haas Quartet and Calidore String Quartet – and giving them their bags, of course.

We have had many appreciative comments about the strength and size of it (good for laptops, scores, books) and that it can also be folded up and stashed away in a pocket or carrying case for spontaneous purchases (pianist Llyr Williams is a self-confessed fan of such items).

Perhaps next time we produce one it will have to be a large fold-out suitbag to accommodate our growing list! Meantime, do snap (and send us) a picture of any that you see on your travels…

BBT bag-toters are in good company too – Mitsuko Uchida liked her bag so much, she asked for another one! 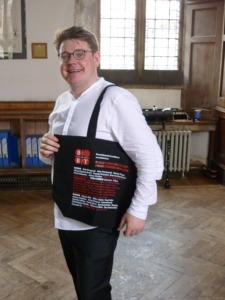 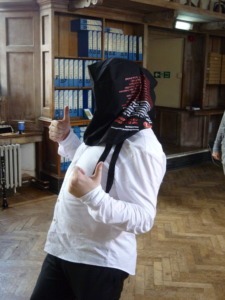 For the shy and retiring – guess who is displaying another way to wear his BBT bag?