Borletti-Buitoni Trust
Back to Blog
21 January 2015

ROMANTIC IMPRESSIONS – how we chose our repertoire 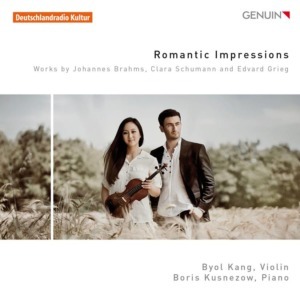 Coming up with the programme for our new CD was a long process and it started off with an important lesson on how NOT to do it. Initially, my Duo partner Boris and I thought it would be an interesting and innovative concept to gather pieces together that illustrate various stages of life, such as childhood, youth, adulthood and age/death. We had chosen three works by Mozart, Strauss and Brahms and even commissioned a piece by composer Francisco Coll for the depiction of adulthood. However, after trying out this programme in concert several times, we realised, it was a concept that only looked good on paper. The idea rationally made sense, but we were missing a musical arch, a coherence in musical content.

Nowadays, hardly any listener of a record plays it through from beginning to end, which I think is a great pity! I remember, how as a child, I had some favourite albums that I would listen to over and over from beginning to end – that’s what made me grow so fond of the music. So I thought I would like to offer this kind of experience to the listeners of our CD as well.

After rejecting our first concept, we attempted another approach and asked ourselves, which piece makes us feel the urge to record it in our guts. Without much discussion, we decided it would be the First Violin Sonata by Johannes Brahms. It is a highly emotional piece, which Brahms wrote because his godson Felix Schumann, the youngest child of Robert and Clara Schumann, had died of tuberculosis at the age of 24. Brahms, who was never married himself, loved Felix like his own child and one can hear his tremendous love and grief throughout the sonata. With this music, Brahms also wanted to console Clara, so he used one of her favourite melodies from his early songs Regenlied and Nachklang and she wrote to him “I could not help bursting into tears of joy over it… I wish the last movement could accompany me to the next world.”

Whenever we played this sonata in concerts, we had some of the most memorable experiences with it – moments where we felt completely in a ‘flow’ and felt a very intimate connection with the audience, which would often remain silent for quite a while after the last note. To us this silence means so much and is a very precious gift. It tells us we have managed to take the audience to a different place, a place so beautiful, they don’t want to wake up from it yet… so all of us in the hall would cherish this quiet moment together, breathe, feel alive and at peace. It’s a truly magical experience at the end of a whole concert. Now for the CD, we put it at the very beginning, because the pulsating chords of the piano sound so warm and inviting and the violin spins out a melody that takes the listener on a journey.

Having decided on Brahms, it didn’t take long to look for pieces by Clara Schumann. When we stumbled across the Three Romances, we immediately felt they were perfect. The three absolutely endearing and short pieces were written for her good friend and violinist Joseph Joachim in 1853 – the year before her husband Robert jumped from a bridge into the Rhine river and was consequently hospitalised in a sanatorium. It was also the year before her eighth child, Felix Schumann, was born. One could almost assume, Clara might have been pregnant with him during the time she composed the pieces, which are like songs without words. Since my father is a singer, I grew up listening to a lot of songs and I always loved pieces with lyrical character. 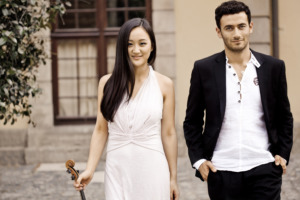 Now it might have been the next logical step to pick a work by Robert Schumann, but we wanted another ‘spice’ in our mix. Edvard Grieg’s Third Violin Sonata brings an element of passionate excitement to the album while still being very lyrical and romantic especially in the beautiful slow movement. Oh, how I love that movement! The piano solo in the beginning conveys solitude, subtle melancholy and longing… the violin then enters with the same melody in a very comfortable register, which after a playful dance tune is repeated in ‘heavenly heights.’

It soon became very clear to us that we wanted to keep the focus on lyricism. There are so many wonderful songs by Grieg that are not very well known, except for Solveig’s Song (from Peer Gynt), so we played through his song books and chose three melodies that instantly felt like they would also work without words. It was a happy coincidence that those songs even have something like a storyline: With The First Meeting we witness a person falling in love with someone at first sight. The Time Of Roses wistfully depicts a love once shared, like fading roses that one remembers when they were in perfect bloom. In Solveig’s Song the protagonist holds on to her belief that her man will return eventually and that she will wait come what may as that is what she has promised.

Though one could say that our chosen program is rather conventional, we feel the music of the romantic era is so wonderful (full of wonder) – sparking imagination with ways to express deep and timeless emotions. So we want to share it with as many people as possible.

We are so very lucky and thankful to have been given a BBT Fellowship, which enabled us to record this CD and we would be very happy if listeners take a little journey with our music, with our Romantic Impressions.

Listen to excerpts from Romantic Impressions