Borletti-Buitoni Trust
Back to Blog
01 December 2014

I have recently emerged from a week in the recording studio with Laurence Cummings and the English Concert Orchestra making a CD for Harmonia Mundi to be released some time in 2015. The recording days followed on immediately from a wonderful concert together of the same repertoire at Milton Court in London on 9 November. 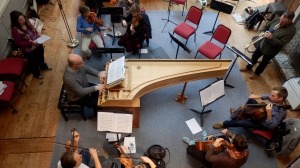 The recording is essentially the final phase of many months – years, really – exploring the wonderful music of Alessandro Scarlatti. I’m doing all this Scarlatti basically because it’s good! Years ago a teacher recommended one of his arias (Ergiti) and I really liked it and thought there must be more to this composer than I knew. Most singers come across him in their books of ‘Arie Antiche‘ when learning to sing but we never hear these arias as they were originally written, with orchestra and a professional singer. So, I started researching. I found some wonderful cantatas, but a lot of these have been recorded so I went to Westminster Music library and got out every score of Alessandro Scarlatti (not to be confused with Domenico, his son) I could find. Laurence Cummings and I ploughed through any remotely promising arias and made a long list, then a short list. I also came across an aria from a serenata called Erminia, the manuscript of which is at the Royal College of Music. I had hoped to make the first recording but someone beat me to it!

Is that what he wrote? Laurence and Liz check out Scarlatti. Photo Claire Hammett

In the end I thought it would be good to make a disc that is an overview of all different types of his vocal output: opera, oratorio, cantatas & serenatas. So that’s what the disc is, a sort of potted Scarlatti round up. I have nicknamed it Scarlattery.

On the opera side, Scarlatti is considered the founder of the Neapolitan school and yet the piece that is considered his masterwork, Mitridate Eupatore, does not have a modern recording (I think there is a dodgy 50s one arranged for modern orchestra). Three arias are featured on the disc. Finding the music has been a nightmare! The music is definitely nodding towards the bel canto era that is to come and can be supremely difficult in places.

Probably the most difficult piece on the disc is the Erminia aria, probably because it was written for a castrato, the great Farinelli. He clearly had quite a set of lungs! The phrases are very long and full of breathtaking (literally!) virtuosity.

It’s been a major undertaking to put all this music together for the disc, to find the scores and to learn 16 technically very difficult arias, many of them Da Capo. Laurence and I have been spending many hours dreaming up exciting ornaments. It’s a great challenge but hopefully by the end of it many more people will have heard more from this neglected composer.