Borletti-Buitoni Trust
Back to Blog
07 October 2014

Whistle and flute* for horn player

Does it matter what you wear on stage? Surely the important thing is what you sound like, not what you look like? I used to be amazed and slightly perturbed by the number of comments I received after performances about what I was wearing. Why weren’t they focusing on my horn playing?! Actually the more concerts I go to the more I realise what a big impression the look of the performance makes. Of course, the music is the most important thing but the audience spends up to two hours staring at you – their impression is inevitably coloured by what you choose to wear. 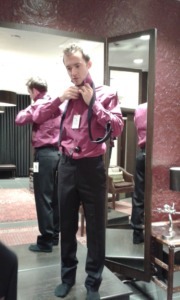 The only problem for me is that I am utterly clueless about clothes. When the BBT suggested I could do with new publicity photos (because I am no longer 18 years old…) the first stumbling-block was not finding a photographer but finding something decent to wear for the shoot. I know what looks good on other people but it is almost impossible for me to buy clothes for myself [I am brilliant at socks]. Cue BBT’s Susan Rivers and Debra Boraston taking me to Oxford Street. Ordinarily this would have been the stuff of nightmares but it turned out to be one of the most man-friendly shops imaginable. Conversation usually ran as follows:

“Can you imagine wearing this, Alec?” “Errm, not really” Item ditched.

Two hours later I had one new suit, two new shirts, two new ties, one new pair of shoes and three new pairs of socks. All this without a single tantrum from me. An amazing achievement for the BBT! I am extremely grateful to Susan and Debra. Now all I need are those photos. And perhaps to practise the horn until I sound as good as I look again.

*for those not familiar with London’s cockney rhyming slang, a ‘whistle and flute’ is a suit.