Borletti-Buitoni Trust
Back to Blog
01 October 2014

“My new Recorder Concerto which I especially composed for Erik Bosgraaf has become one of my most personal and biographical works and has an enormous emotional impact.” Willem Jeths 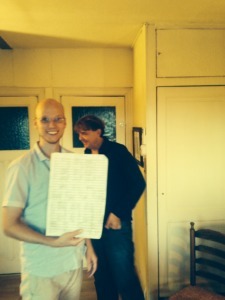 The working process with leading Dutch composer Willem Jeths (b. Amsterdam, 1959) has been inspiring in so many aspects. We players of instruments often see only the here and now as we are dealing with so many detailed aspects surrounding the performance. But composers are looking for a way to connect our instrument to their imagination. After months of hard work, transferring his imagination to paper, the composer hands over to the performer the task of blowing life into his creation on the page. Sometimes that makes me feel like the platonic man in the cave, trying to make sense of the shadows on the wall, hoping to create an experience of the jenseits.

Willem associates the recorder with both innocence and beauty. He relates the tension between the vulnerable recorder and the grand orchestra to his memories as a young child finding his way in a hostile environment, misunderstood by his father. The role of memory in the piece is implicit in the choice of instrument for the solo part. In a ‘pre-tape-recorder’ era, the musical instrument, the recorder,  was the common way to remember tunes. Willem takes this century-old tradition of the recorder as a ‘remembering instrument’ to a new level using it as a magical time machine to enter childhood once more. This is both a nostalgic, as well as an uncomfortable, expedition. For Willem, and for so many other people, the recorder is the subject of a classical love/hate relationship. Thus the piece starts off with dramatic blasts in the orchestra followed by high and piercing solos in the highest register of the instrument. Later on he accompanies the recorder in its softest registers with glass harmonica and celesta.

The melancholy that comes with memories is traditionally associated with the recorder. The instrument features in vanitas paintings as a symbol for the death body: without human air, it doesn’t not sound. And, of course, it features prominently in one of the most famous works of the baroque era: the Actus Tragicus or Mourning Cantata by JS Bach where its ethereal tones open the funeral cantate. In Willem’s brilliant orchestration of the concerto, the theme of death and childhood also comes back as a faint echo from Mahler’s Kindertotenlieder.

All in all, the result of all this thematic inspiration is a piece heavily loaded with emotion in which Willem forces me to go beyond the traditional boundaries of the instrument into unknown territory, releasing what he calls “the pure musicality”. Maybe, after all, we might catch a glimpse of the jenseits… 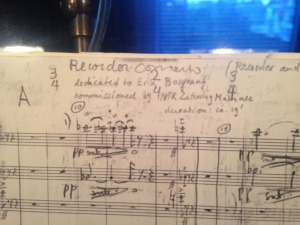