BBT Celebrated: Who Can Believe It!

Here we are just four weeks away from BBT Celebrated, with 13 events taking place at the Southbank over three days (May 17-19), and we are in overdrive.

It is incredible to think that we are now so close to seeing the fulfillment of an idea which I had over three years ago to celebrate the Trust’s 10th Anniversary. I saw it as a way to recognise the work of our enormously talented BBT artists, the involvement of founding Trustee Mitsuko Uchida and the generosity of Ilaria Borletti Buitoni and her husband Franco Buitoni.

Of course the three concerts, in which Mitsuko Uchida will take part, will be the highlight of Celebrated, but we are delighted that we are able to offer so many free events around the concerts. Three pre-concert talks, two informal late night concerts, four masterclasses for trombone, percussion, oboe and clarinet and not least our debate ‘Is Talent Enough?’.

This was the idea of Ilaria Borletti Buitoni who wanted to encourage discussion about the pressures and challenges that all young artists face when trying to sustain a successful career in music.  Mitsuko Uchida will open the session with an intriguing film (she can’t attend in person as she will be rehearsing for her QEH concert that morning, although I wonder if we will be able to keep her away!) and then our outstanding panellists from all areas of the music business will chip in with their thoughts on the subject, plus we hope for lively debate from the floor. Don’t miss it! 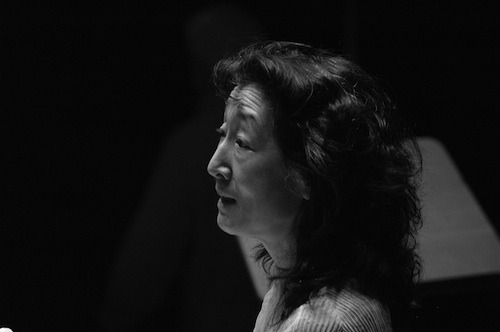 Meanwhile, colleague David Hoskins is beavering away sorting out the complex travel and rehearsal schedules for the 24 musicians involved and dealing with all the production matters that have to be resolved; Debra Boraston is working her magic with the press including organising the various foreign journalists that are attending and our film-maker Graham Johnston* is going to join us on this occasion in his capacity as an artist to make sketches of the musicians in rehearsal which will be on display in the foyer of the Queen Elizabeth Hall. Intermusica, promoters of the International Chamber Music Season with the Southbank (of which Celebrated is a part) are doing their bit helping with the marketing and getting the printed programme together.

What am I doing you may ask?  Well, there are the masterclass students to sort out; volunteer helpers to coordinate; ticket lists to organise (a nightmare); receptions to arrange; bags, badges and balloons to order; budgets to keep a tight hold on and a myriad of other things to do. I am also keeping up-to-date with our current projects for our BBT artists and organising the new nominations for musicians to be considered for BBT awards in 2014 – believe me it’s enough.

So get ready to celebrate! We are!

* We are pleased to announce that we have now had over 250,000 views on our BBT YouTube channel since we launched in 2009.