Borletti-Buitoni Trust
Back to Blog
24 September 2010

ConcertO-Duo: Banff to Barbican (via Essex)

I’m now in that odd limbo for a composer between having finished a major work and its first performance.  I sent the full score of the Concerto to my publishers in the middle of July, having delivered the final section to Owen and Olly on the 2 July (on time!).  I did various proof corrections by email from Canada where I was resident at the Banff Centre in August, but that’s now all complete, the conductor has the full score and the BBC Symphony Orchestra has the parts.  I now wait until the first rehearsal on 19th October and hope that everyone else is quietly getting on with it.  No one has screamed yet!

Like with any musicians who have busy careers, working with Olly and Owen is a roller-coaster ride.  Olly lives in a six-star luxury penthouse riverside apartment in the same block as Geoffrey Archer, and we often meet in his rooftop studio where His Lordship (as Olly likes to be known) works out on a set of 18 specially flown-in Japanese ceremonial gongs for which the floors have been strengthened.  Owen on the other hand lives in his white van in the car park of a Little Chef on the A127 near Basildon and exists entirely on Ginsters pie products.  He is also a championship level surfer, so Essex presents unique challenges.

Of course only one thing in the previous paragraph is actually true (you’ll have to work out which one), but as part of writing the Concerto I imagined a scenario for two successful young men who were negotiating a strange fantasy world, part computer game, part reality TV show.  It was much darker than the nonsense above, but it helped me to build a set of individual ‘characters’ to walk through the piece. 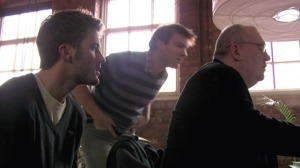 It took me longer than expected to write.  I sketched some ideas at the end of last year and tried a few things out with Olly and Owen in January.  Starting was not a problem and I wrote the orchestral introduction very quickly.  I’d considered the options and decided to more or less stick to the ‘traditional’ three-movement form.  There are a number of reasons for that decision, one being that the Concerto had come about partly because of demand from orchestras for a Concerto for the O Duo and this format is easy to programme.   More importantly however, I developed a sort of narrative structure of discovery and exploration and three sections seemed to work well.  It also allows a certain release and clear change in mood for the listener and instinctively feels a psychologically satisfying form, facilitating a perception and ease of navigation important in a new work.

OK, that was the easy bit…

I knew what I wanted to do, but it took several trials to get to two-thirds through the first section.  I did a residency at the Leighton Artists Colony in Banff in March to work with Giles Foden on the outline for our new opera based on his novel, The Last King of Scotland.  I don’t know if other composers ever do this, but when I was finding it hard to make progress, Giles introduced me to the concept of the ‘objective correlative’, which he said he finds useful sometimes to get over a block.  Basically, in the way I used it anyway, it is a method of constructing a narrative or event to describe or evoke an emotion.    I found this helpful to stimulate not only musical ideas, but – perhaps more importantly – a structure.

Banff gave me a hut in the woods (actually an architect designed studio that one could easily live in, but they call them huts).  Here I was able to spread out my sketches and computer print-outs and rearrange them in various ways.  I could also explore and push the computer software (Sibelius 6 if you are wondering) and work out the best way to notate complex percussion music.   I find that it’s never the individual musical ideas that are the problem – they come easily enough – but getting a coherent and logical flow.  The Banff space was very useful, a change of air and location, and I was able to go Italy in April with a more or less worked out plan.

I put the Concerto aside for a few weeks and worked on something else. I did not go back to it until May.  It seemed like a different piece then and I immediately solved a few structural problems with a distinct sense of ‘that’s so obvious why did I not see it earlier’.  The second and third parts just flowed naturally from there.  I had never really seen the parts as separate pieces of music and I always know how I wanted the final section to start, so it was more a matter of working towards that goal.  I usually have an overall idea for how I want a work to look, feel and sound – it’s character or atmosphere if you like. The Concerto, based as it is on the characters of Olly and Owen, always had a very distinct feel to it.  The challenge was to translate that into something to hear on 22nd October.

Actually working with Owen and Olly is very straightforward once one has solved the communication problems.  Olly seems to have a difficult relationship with his iPhone and Owen, if not driving, is playing.  The logistics have to be worked on too because it’s not easy getting all the instruments in one place.  Olly’s real studio (as opposed to my imagined one) is big so we can get nearly everything in there, but even so, we probably won’t have all the instruments until we arrive at Maida Vale to rehearse with the BBC Symphony Orchestra.  Apart from the two marimbas, two sets of bells, xylophone, vibraphone and a host of small instruments, some things – the waterphone and an air-raid siren for instance – will be hired.

We think the set-up will take the whole of the front of the Barbican stage, so it is just as well that there is an interval before (and I believe after) the Concerto.  This means that the visual impact will be impressive even before Owen and Olly play a note.  But things will really kick off when they play.  The first section of the Concerto is about discovery and, starting with clapping skin on skin, the guys work their way round the instruments – from wood to metal to drums, sometimes with the orchestra, sometime in opposition.  It is not until fairly late in the first section that we finally hear tuned percussion instruments.

All of this provides a spectacular show for ears and eyes.   The O Duo have always been a delight to watch even if their energy leaves one breathless.  This – the ability to entertain as well as being fine musical artists – is an important part of who they are and something that I found impossible to resist.