Borletti-Buitoni Trust
Back to Blog
05 November 2008

The Concertgebouw is one of the most special cradles of music in the world. Some halls sound beautiful; others look beautiful. Then there is the inexplicable mystique associated with certain places like Carnegie Hall, Wigmore Hall, the Musikverein, something awe-inspiring about the history of concerts in that particular space; millions, perhaps billions, of notes must have permeated every wall, floor, seat, and the spaces between. The Concertgebouw has all of the above. 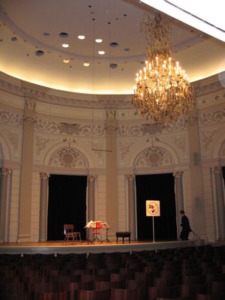 We played in the smaller of the two halls which is truly a gem. It is amazing how the hall affects the performance for the performers and the audience. Some halls give us good odds as if we were the home team; others are pitted against us before even a note has been played. Playing at the Concertgebouw is like beginning a game with a three-touchdown lead. Everybody in the group had played in the hall before, some of them countless times. But from the moment we walked into the rehearsal and played the first notes, everybody still marveled at the place. The hall was like a living organism interacting with our sounds and our hearts like that inspiring person who brings out your best qualities.

But our concert was not the headliner of November 4. My good friend John Canning and I will never forget watching the election results at the Amsterdam Hilton, the excitement crescendoing to a climax around 5:30am our time when Obama made his victory speech. I was thrilled to have just played at the Concertgebouw but I would have been just as happy dancing in the streets of Harlem.