Borletti-Buitoni Trust
Back to Blog
24 May 2021

Joshua Hopkins on the loss of his beloved sister, the epidemic of gender-based violence, and how
Songs for Murdered Sisters came to be. 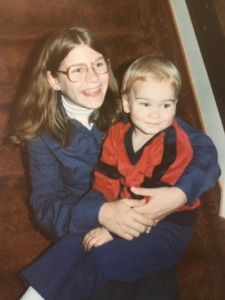 A young Joshua (right) poses for a photo with his sister Nathalie (left) on the staircase in their childhood home. Photo courtesy Joshua Hopkins.

I’ll never forget the tragic phone call I received in the late afternoon of September 22, 2015. My father’s wife was on the line and spoke the words, “Your sister Nathalie was shot and murdered by Basil.” At first I couldn’t comprehend the news, struck by shock. She repeated her words more slowly. I was speechless and started shaking. It was a beautiful autumn day in Canada’s capital, where I was in the midst of final rehearsals for The Barber of Seville as the title role of Figaro. I remember walking to rehearsal an hour later with my wife Zoe, both of us in a complete daze—our world had been turned upside down. That morning my sister’s ex-boyfriend, Basil Borutski, had gone on a killing spree, brutally murdering three women in their separate homes in Renfrew County, just west of Ottawa. My beloved sister, Nathalie Warmerdam (née Hopkins), Anastasia Kuzyk, and Carol Culleton were the victims of a crime that would be recognized as one of the worst cases of domestic violence in Canadian history. 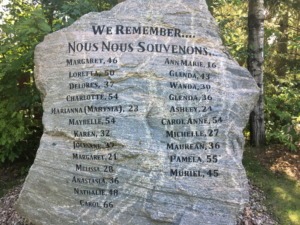 The Renfrew County Women’s Monument was created in Joshua’s hometown of Petawawa, Ontario to remember, honor and grieve local women who have been murdered by men. This large stone lists the names and ages of those women, including Joshua’s sister Nathalie. Photo Joshua Hopkins.

Somehow, I went on with my rehearsals and sang all of the Barber performances; my opening night was just four days after Nathalie’s murder. I welcomed the focused distraction of Figaro’s challenging vocal acrobatics and comedic antics within Rossini’s masterpiece. It was a strange coincidence that I was working near my hometown of Petawawa, Ontario, where my family had gathered to mourn. This meant Zoe and I could be with them on three separate occasions between my performances. Each visit involved a surreal event of some sort: a sombre meeting with the Provincial homicide detectives in a family living room; Nathalie’s visitation held on a star-filled, crystal clear evening at a funeral home in the neighboring city of Pembroke; and the “Celebration of Nathalie,” a gathering held to pay tribute to her by way of poetry readings, speeches, and musical presentations. I sang Rodgers & Hammerstein’s “When You Walk Through a Storm.” 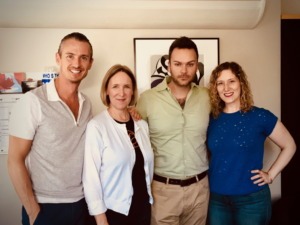 The day before my final Barber performance, my wife and I met with the artistic administration of Canada’s National Arts Centre Orchestra (NACO). An idea had formed—to create a new musical work, not only to commemorate my sister but also to bring social awareness to the global epidemic of gender-based violence. The intention was to develop a song cycle, melding the power and beauty of poetry and music to tell this personal story through my voice as someone who has suffered a great loss. I walked out of the meeting with a heart full of gratitude and promise, supported by NACO’s strong commitment to addressing this tragedy.

When I returned home to Houston, my amazing friends at Houston Grand Opera (HGO) gave their love and support to me and my family. Patrick Summers offered his condolences and asked if there was anything he could do. I told him about this new project I was creating with NACO, and without hesitation, Patrick promised to seek HGO resources for co-commissioning our song cycle, broadening its reach across the border.

The search was on for the creators. For our composer, I asked myself the following questions: Who can I trust to handle this emotionally sensitive subject with grace? Who can craft a beautiful and melodic collection of songs? As it happened, in the autumn of 2016 I was creating the role of Harry Bailey for the HGO world premiere of Jake Heggie’s glorious new work, It’s a Wonderful Life. During the opera’s run, I met with Jake to pitch the project. The subject of bringing awareness to violence against women touched him deeply, and he jumped on board to find a way to share my sister’s story through song. I felt so fortunate to be working with Jake. He and I both strongly believed that our writer should be a Canadian woman, to keep our intention of a cross-border initiative and to ensure the project included a female voice. He encouraged me to THINK BIG, so that the project would reach the widest possible audience. Names like Joni Mitchell and k.d. lang were discussed.

As fate would have it, the following January I was singing Papageno in Mozart’s The Magic Flute in Toronto, and a close friend recognised world-renowned author and poet Margaret Atwood in the audience. Could there be a more ideal writer of our time to address this serious topic? We knew we would be incredibly privileged to have her involved. When Jake and I reached out, her response was immediate but tentative. Over the course of the next few weeks, without committing to the project but very much engaged, Margaret asked questions about the structure of the cycle and my relationship with my sister. Another issue she raised was the lack of a female singing voice in the project, something which Jake and I had previously discussed. I responded to her: “I have grappled with whether or not it makes sense for me to be the artist presenting this work because I’m a man. I’ve concluded that this is a subject worthy of examination regardless of gender and that it is vital that men speak out against domestic abuse.” 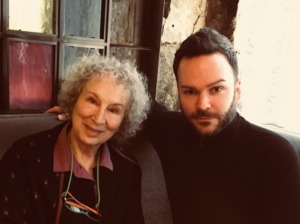 There are significant moments in life which are etched in our memories for eternity. Less than a month after proposing the project to Margaret, Zoe and I were attending a performance at the Metropolitan Opera in New York when I received an incredible surprise gift. At intermission, as is commonplace in this digital age, I checked my email and found a new message from Margaret that included eight powerful new poems. I was stunned—before formally committing to the project, she had sent us her beautiful words. Barely having time to skim what she had titled Songs for Murdered Sisters, I returned to the auditorium for the second act, my head reeling. The next morning, I shut myself alone in my bedroom and read Margaret’s poems without distraction. I wept. I was compelled to write her: “I am completely floored by what you have written and I’m deeply touched. I never could have imagined that my grief, my guilt, my anger could have been so elegantly crafted into such beautiful and striking words.” 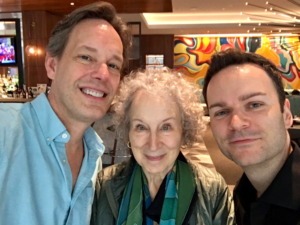 Fast-forward two years to another day that I will never forget, when Jake sent the completed piano/vocal score of his 27-minute song cycle. Jake relates his work to Schubert’s epic cycle Die Winterreise, or “Winter’s Journey.” He describes this journey like that of a devastated wanderer attempting to find meaning and answers within a landscape of love, loss, grief, anger, rage, and possible redemption. I wrote in response, “And here they are! I can’t wait to hear how you have interpreted and paced Margaret’s remarkable texts. You have both given me the most amazing gift possible through your unbelievable creative talents.”

Weeks later, after theatres around the world had shuttered their doors and canceled live performances for the foreseeable future due to the coronavirus pandemic, I sat at my keyboard with a heavy heart and listened to a recording that Jake had made for me, playing his own songs on piano. I played my vocal line while I listened to get a sense of how the voice complemented the instrumental line. When the final song hauntingly faded away, I picked up my phone and, shaking with emotion, called Jake immediately. I reached his voicemail and, with a wavering voice filled with profound emotion, left him a rambling message of gratitude and admiration.

Much has happened since then. As we had feared, our live September world premiere performances of Songs for Murdered Sisters were postponed in Houston; the orchestral premiere with NACO in Ottawa was also postponed. However, the project took a surprising and unexpected turn when Jake and HGO proposed making a professional film of the cycle, to premiere as a virtual online presentation on Marquee TV as part of the groundbreaking HGO Digital Sarah and Ernest Butler Performance Series. So, in late October, I embarked on an emotionally cathartic journey, joining Jake and an incredible group of talented creatives in San Francisco to make art during a pandemic. Jake and I first recorded the song cycle over three days on the breathtaking Skywalker Sound scoring stage, not only to serve as the audio track for the film, but also to be released as a professional digital recording on the Pentatone label on March 5. 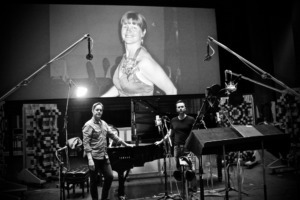 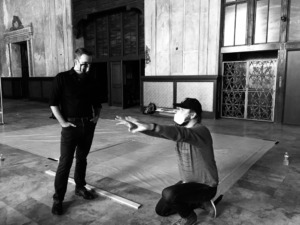 We then joined forces with the wonderful director James Niebuhr and his fabulous crew to make the film. During an adrenaline-filled, fifteen-hour shoot inside the crumbling depths of Oakland’s abandoned 16th Street train station, I inhabited the grief and rage that welled up from within.

As I sit in my study writing this account while the pandemic rages on, I can’t help but think of the thousands of women in danger from their abusive partners, trapped at home and unable to escape or connect with those who could support and protect them during isolation. The alarming statistics on domestic violence are sobering here in Houston. Even before the pandemic, Harris County “consistently ranked number one in Texas for the highest number of most women killed by intimate partners” (Houston Chronicle, Hannah Dellinger, August 11, 2020). There have also been significant spikes in calls and police responses since the pandemic began. “The number of people killed by family violence in Harris County increased 58 percent from March through October [2020] compared to the same time frame last year” (Houston Chronicle, Hannah Dellinger, November 24, 2020). However, over the past year the city of Houston has been adapting to provide help for victims. In September, Mayor Sylvester Turner expanded the mayor’s office of human trafficking to include domestic violence, and in November, he announced he would “use $6.2 million in federal COVID-19 relief dollars to expand the availability of police department teams that help respond to domestic abuse calls. The teams pair police officers with victims’ advocates to help provide a less intimidating response” (Houston Chronicle, Dylan McGuinness, November 9, 2020). 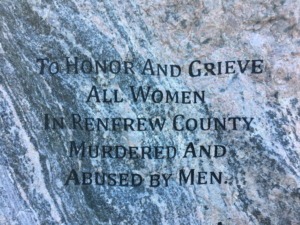 The future, as uncertain as it is, must be filled with hope. Hope that the live performing arts will again provide a platform for deep emotional connection and cathartic release. Hope to improve laws to better protect the countless victims of gender-based violence—our sisters. I have often found myself feeling numb about Nathalie’s death—something too shocking to comprehend. Since receiving Margaret’s haunting words and then Jake’s gorgeous music, I have shed countless tears. The words and music, in their own separate ways and woven together, have opened a portal to my heart, connecting me to complicated emotions that were lying dormant under all the layers of self-protection and denial. This work has provided meaning for me, transforming my grief into something palpable. If I can awaken the heart of someone who does not yet recognise this societal failure caused by our patriarchal system, or motivate someone to do their part, take action and perhaps save someone from a similar plight as Nathalie’s, then I may truly hope to honour my sister’s memory.

What you can do to help: 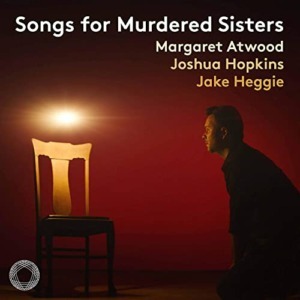 Songs from Sorrow by Joshua Hopkins